After looking at the hitting prospects in my last breakdown I’m going to take a look at the Rays pitching prospects today. I'm very sorry for the delay of my breakdowns. I was strongly focusing on Draft coverage over the last month.

Thus, in addition to the about 30 prospects already on the following list, I'm going to add six Rays '11 draftees (Taylor Guerrieri, Jeff Ames, Ian Snell, Grayson Garvin, Lenny Linsky and Ryan Carpenter) as soon as they start playing. While Snell has already signed (we will see him in the GCL soon) and Jeff Ames reportedly is near to signing, I think especially Taylor Guerrieri won’t be signed soon. Garvin, as already polished pitcher, could jump to Bowling Green right after signing while Ryan Carpenter might start in Hudson Valley. Lenny Linsky could take the high road in the system and move right to Bowling Green or even Port Charlotte.

The top pre-season pitching prospects took a big step forward since my last pitching prospect breakdown. After having an ERA of 5.17 before they had an ERA of 3.67 in their last (combined) 318.2 IP (not including yesterdays’ starts of Chris Archer and Wilking Rodriguez). Overall it seems that they tried to overpower they opposition a little bit less. They lowered their strikeout-rate from 11.5 K/9 (after 119 IP) to 10.2 (after 214 IP) to now 9.3 K/9 (after now 532.2 IP). The strikeout-rate since the last breakdown was a very solid 8.7 K/9, nevertheless. 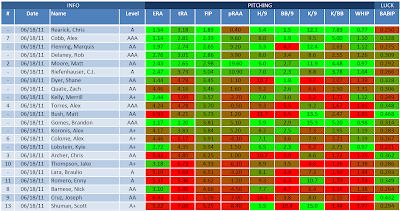 On the starting pitching front Alex Cobb and Matt Moore are very advanced and they both look more and more MLB ready. Behind them, Chris Archer starts to show some slow progress. Further down the top starting pitching prospects stuff-wise (Alex Colome and Enny Romero) are mixing excellent starts with starts to forget. Especially Romero is being praised by scouts for his stuff. “Only” the high walk rate is holding him back from reaching elite prospect status. I am more confident with him now than with Alex Colome.

Looking at the relief pitchers, the Rays should have some solid in-house options for the major league club while missing the closer ceiling reliever (maybe lately drafted Lenny Linsky can become just that). However, the guy with the heaviest fastball (Scott Shuman) is struggling the most. He went back to his college performances where he simply couldn’t control the strike zone at all. His very impressive 5.5 H/9 and 15 K/9 are opposed by 10.4 BB/9 (!!!). Brandon Gomes and Rob Delaney (in AAA), Marquis Fleming (AA) and Chris Rearick (A) have very solid seasons while right-now-starters like Alex Torres, Nick Barnese and Jake Thompson also seem to be legitimate in-house prospects for a relief spot in St. Petersburg.

3 (and one additional) prospects on the rise

The prospect of the week: Matthew Moore

Who else should I focus on other than the hands-down best left handed pitching prospect in the minors (maybe even best overall pitching prospect) after throwing a complete game no-hitter and being born exactly 22 years from today? After being the 2nd or 3rd best overall Rays prospect pre-season (behind the now graduated Jeremy Hellickson and on some lists Desmond Jennings) he easily overtook Jennings (despite Jennings playing very well in his own right) to become the best prospect in the Rays minors. He again strikes out about 12 batters per 9 innings (11.94 after 12.7-12.8 in years '07-'10) while showing much better control (and reportedly also command) of his pitches (2.67 BB/9 after 3.8 in '10 and 5.1 in '09). His plus-plus FB and curve as well as his developing change are simply way too much for AA hitters.

Kevin described his stuff pretty accurate in the Rays Prospect Guide for ’11. His description goes along with other reports in the industry:

Moore gets it done with two plus offerings that may already be plus-plus. He has a lightning-quick arm that produces easy 93-96 mph fastballs, and he uses the same arm slot to drop an upper-70s curveball with late, sharp, two-plane break on hitters, generating a ton of swings and misses. He also throws a circle-changeup that flashes plus potential with good fade, though he hasn't thrown it enough to be consistent with it.

Stone Crabs' pitching coach Neil Allen tweaked Moore's fastball grip, which helped him locate it better in the second half. mechanics aren't simple, and he loses the strike zone when they get out of whack. He's gone through streches where his control is above-average but has yet to do it for an entire season. He's got a durable frame and is able to carry his stuff deep into games, and he's been at his best the past two years late in the season. Moore has legitimate ace potential.

Going into this season, his stuff was unquestioned. "Only" his changeup needed more consistency. His control, though, especially early in the season was erratic at best in recent years. However, this year he controlled his pitches from the start of the season and continues to do so. The results are more than pretty: 2.43 ERA, 4.47 K/BB ratio, 2.98 FIP, .186 AVG. against. He simply dominates. Regarding the development of the changeup I quote Jason Parks of BP (H/T to R.J. Anderson and the guys of theprocessreport.com):

The changeup projects to be an average major-league pitch at the very least; it already flashes plus potential, with good arm-side fading action and natural weight. The delivery has been considered noisy, leading to bouts of inconsistent command, but reports on the delivery have been positive and the command has been much improved in 2011.

He's maintaining the outstanding component ratios he demonstrated last year in High-A, utilizing his low-to-mid-90s fastball, hard-breaking curve, and improving changeup. He's a clear Grade A prospect, probably the best southpaw prospect currently in the minors, and the no-hitter is just one more positive on his resume.

Overall, everything is positive with Matt Moore. He projects as a front-of-the-rotation pitcher with a workhorse build and also shows the results of one. What is the plan of the Rays for him? Right now they have six players ahead of him on the starting pitching depth chart: David Price, James Shields, Jeremy Hellickson, Wade Davis, Jeff Niemann and Alex Cobb. A combination of these 6 will complement the rotation for the rest of '11 and at the beginning of '12. Moore, though, will and should move up to AAA anywhen this season and start in major league games anywhen in '12. I think, barring any injuries, that the Rays will move one of the 6 pitchers ahead of him before the start of '12 (either by trading Shields, moving Niemann, ...). He will and should be the next in line, then. And, at the latest, will then start games in the 2nd half of '12. Barring an injury and some starting pitchers' results plummeting, I think this will be in September '12. I can't wait for him to start in St. Pete, though. How does a rotation of Price-Shields-Hellickson-Moore-Davis/Cobb/Niemann sound? This is me not hoping for a Shields trade in the near future.

The stats from StatCorner and FanGraphs provided above are excluding the stats from the previous day. I preferrably use 3 sources for the stats. Click on each stat for its explanation:

-- By BurGi at 2:00 PM
Email ThisBlogThis!Share to TwitterShare to FacebookShare to Pinterest