After looking at the hitting prospects last week I’m going to take the 2nd look at the Rays pitching prospects today.

I’ve added C.J. Riefenhauser and Chris Rearick to the table as both started very well into the season.

As we already are more than a month into the season we can read much more out of the data now than two weeks ago. Unfortunately, the overall numbers of the top 15 pitching prospects pre season still look ugly. They combine for an ERA of 5.19. They so far have pitched 10.5 runs BELOW AVERAGE. Even a fairly high BABIP of .323 can’t offset these numbers as their combined IP total is 213.1 innings. The FIP (4.35) is better, though, but still nowhere near what we expected.

Looking at the individual pitching performances, especially some of the top starting pitching prospects struggle mightily. Nick Barnese (his BABIP suggests that he hasn’t even been unlucky), Enny Romero (last 3 starts: 8 IP, 17 H, 10 ER, 9 BB, 11 K) and Joe Cruz (11.14 ERA, 8.39 FIP, 13.7 H/9, 1.1:1 K/BB ratio) took substantial steps backwards thus far. At least the strikeout rates of Barnese and Romero are still where they should be. The top 15 pitching prospects combine for a K/9 rate of 10.3. So, they can get hitters to strike out. 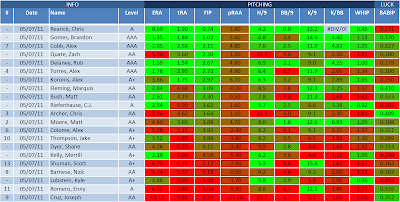 1) Matt Moore … After a slow start to the season (like seemingly every year) he has been his old self lately. 23 K and just 10 H and 4 BB over his last two starts (16 IP) show that. Overall his (hopefully lasting) command (only 1.8 BB/9) and high strikeout rate (12.6 K/9) make him by far the best pitching prospect in the system and one of the best 5 overall.

2) Brandon Gomes … Another 6 exceptionally well pitched innings in Durham rightfully earned him a spot in the Rays bullpen. For a detailed breakdown of his numbers and repertoire check out this great post by Kevin.

3) Alex Colome … Not counting his first start of the season (1.2 IP, 5 H, 7 ER, 4 BB, 1 K) he has been fairly solid with an upward tendency. I hope this trend continues. His FIP and BABIP also suggest that he has been on the receiving end of some bad luck.

3) Jacob Thompson … Despite reports of him not having a torn ACL, he hasn’t pitched since 04/27 and was placed on the 7-day DL. This uncertainty and his dismal peripheral stats (6.5 K/9, tRA and FIP higher than his ERA, BABIP < .300 put him on this list.

The stat of the week: BABIP

By clicking at the links above you can check out Steve Slowinski’s excellent descriptions of the concepts of offensive and defensive BABIP. He also provides a BABIP calculator, some reference data and a video of the luck dragon explaining BABIP.

Considering the concept for pitchers first, a high BABIP means that lots of the balls in play against a pitcher have gone for hits. So, a high BABIP is either caused by …

A pitcher himself can only influence the 3rd criteria and thus, normally, high BABIPs for a pitcher suggest that a pitcher is better than his ERA and H/9 stats tell. The MLB average BABIP rate in 2010 was .302. Thus, looking at the data of the Rays pitching prospects, pitchers like Chris Rearick or Merrill Kelly seem to have been lucky thus far while e.g. Brandon Gomes (wow! Unlucky despite these strong numbers) or Chris Archer have been unlucky. As a result, I for instance am not as concerned about Chris Archer than others while on the other side thinking that Merrill Kelly simply is not as good of a pitcher as his ERA says.

Reversing the concept, by looking at the BABIP for batters means, that a high BABIP now suggests that the specific batter has been lucky or faced by bad defenses. Some batters, however, historically have above average BABIPs. Mostly, these are line drive hitters (as line drives more often go for hits than groundballs) with lots of speed (as they can beat the defense to the base). But, as explained above, the batter can only influence one of three criteria’s of BABIP.

So, the concept of BABIP is a very important one in order to assess a players’ performance. It relativizes stats like ERA and H/9 and it correlates with more advanced stats like FIP (fielding independent pitching … measuring a pitchers performance by assuming an average BABIP) . Normally, pitchers with a lower FIP than ERA have been unlucky and thus have a high BABIP.

Links to all of the stats can be found – as always – in the glossary.

All of the stats provided above are excluding the stats from the previous day. I preferrably use 3 sources for the stats. Click on each stat for its explanation:

-- By BurGi at 7:49 AM
Email ThisBlogThis!Share to TwitterShare to FacebookShare to Pinterest