Draft day is finally here and lots of draft experts have put out up-to-date mock drafts and draft rankings over the weekend. All of the 10 mock drafts used for the chart below and the 4 draft prospect rankings are up-to-date. For the last version of the cumulative mock draft board look at this post.
I'm going to look at the Mock Draft Board first. I will point out new trends and news as well as most mocked picks for the Rays. Afterwards I'm going to take a deep look at the Rankings Board. There I will look at the difference a player is ranked and mocked. I will look at the chance of each player to be available with the Rays 1st round picks according to the mocks. And I will look at cumulative percentage that the players up to a certain rank will be available with the Rays 1st round picks.
The final cumulative mock draft board:
For the final cumulative draft board I have used 10 of the 12 (by me) known top draft sources around (Only the subscription required up-to-date Keith Law and Perfect Game mocks are not included):
Overall 74 prospects were selected in at least one of these mock drafts. All of them can be seen in the table below. 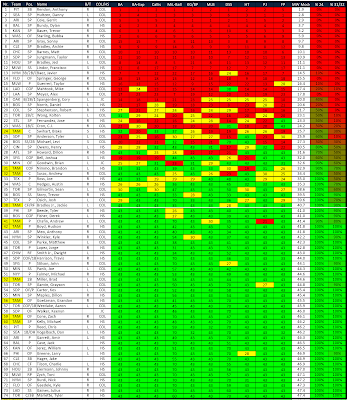 (Click at the table for a larger view)
Here are some tidbits from the cumulative mock board:
The final cumulative draft rankings:
Overall a total of 167 players have been ranked in the top prospect lists I've considered. These
lists are:
On the left side you can see the cumulative board (click on the table for larger view). So ... what can we read out of this table?
I wish you guys all the fun in the world with the draft and the live draft coverage here at RaysProspects. Lets spend some money and select top talents Andrew, Stu and R.J..
-- By BurGi at 6:00 AM
Email ThisBlogThis!Share to TwitterShare to FacebookShare to Pinterest