In addition to the about 30 prospects already on the following list, I'm going to add lots (8) of Rays '11 draftees as soon as they start playing:

The players I've not added to the chart yet are not forgotten as I always take a look at the progress of all minor league players. Nevertheless, as time is a squarce commodity, I'm not able to put up the stats of all of them.
Overall I'm not going to comment a lot on the newly started players as their performances vary very much and in most cases don't show their talent level (e.g.: Grandon Goetzman: .507 wOBA, Josh Sale: .187 wOBA).
Hitting prospects stats overview
Overall, the top 15 hitting prospects pre season took a step back. Since the last hitting prospect breakdown they combined for a stat line of .268 - .339 - .752, good for a .346 wOBA in 1204 PA’s. The decline (wOBA before: .371; OPS before: .818) is mostly due to declines of the before outlandish performing Desmond Jennings (.800 OPS since last breakdown) and Hak-Yu Lee (.773 OPS), due to declines of Luke Bailey (.577 OPS) and Todd Glaesmann (.525 OPS) as well as due to slow starts of Josh Sale (.473 OPS), Drew Vettleson (.444 OPS) and Ty Morrison (.583 OPS). Looking at the performances from a level-to-level point, especially the lower level players seem to struggle at the plate. The Hot Rods' hitters and the XST-affiliate hitters are overall not performing very well. The higher level (A+, AA, AAA) hitters on the other side put up impressive numbers throughout the board. In the upper levels some players could move up one level as they show an advanced approach at their current level. Some examples are Brandon Guyer, Jose Lobaton and Desmond Jennings (AAA --> MLB), Daniel Mayora, Nevin Ashley and Stephen Vogt (AA --> AAA) as well as Hak-Yu Lee and Tyler Bortnick (A+ --> AA). 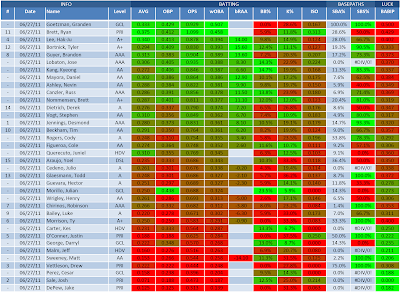 (Click at the image for a larger view)
3 prospects on the risk
3 prospects falling
The prospect of the week: Kyeong Kang
Kyeong Kang looked a lot like Reid Fronk at the beginning of the season. He played very well and showed some promise in short season ball (.769 OPS in PRI, .801 OPS in HDV) and Bowling Green (.880 OPS) while hitting below average in Port Charlotte. Reid Fronk needed two years to show something in A+ while seamingly hitting the AA wall this year in Montgomery. Kyeong Kang looked the same way this year in April. He drew some walks (16.7 %) but couldn't hit for contact (.167 AVG) or power (0.042 ISO). That simply wasn't enough for an outfielder who will be limited to a corner spot defensively. Though, in May and June he turned things around. First he improved his contact rate to an average north of .300 in May. Then he added some - in '10 completely lost - power to his game while further improving his K:BB ratio (17:16).
That's a very good sign as Kang needs his power to develop in order to emerge as a legit prospect. His approach has always been solid but his contact skills are not as advanced in order to carry him to the bigs. He needs at least some (10-20 HR) power in order to complement his solid all-around game.
Another positive to his game in '11 is, that he already has swiped 5 bags while being caught only once. Base stealing needs to be a part of his game in order to become a threat in more than one category. In '10 he was caught 4 times in 6 attempts, while he showed some base stealing skills before in '08 and '09.
Kevin had this to say about him in the Rays Prospect Guide for 2011:
Originally from South Korea, Kang went to high school in the United States. He entered
the season with some hype, coming off a successful year with Bowling Green. But his
overall game failed to move forward while his biggest concern, his power, took a step
back. He hit just one home run all season and just 15 in four years, well below average
for a corner outfielder.
He's got some decent tools, but will need to apply them to the diamond better. After
stealing ten bases in 2009, he only swiped two bags last year, and only has 21 in his
career. With a strong crop of outfielders due up from Bowling Green, Kang may get
promoted to Montgomery simply to maintain everyday playing time in 2011.
Overall, Kyeong Kang needs to completely develop his tools (okay contact skills, developing power potential, good eye, decent speed) in order to become a major league player. I've always liked him and I'm positive that he can do that. He could become such a player who has no standout tool but who can do everything well. Look for him to be in Montgomery the whole year. If he maintains the level of the last two months he should be promoted to Durham in '12.
Glossary

All of the stats provided above are excluding the stats from the previous day. I preferrably use 3 sources for the stats. Click on each stat for its explanation:
-- By BurGi at 7:00 AM
Email ThisBlogThis!Share to TwitterShare to FacebookShare to Pinterest