Click on the photo below to view a few pictures from Thursday's Stone Crabs game against Jupiter. The game featured Jeremy Hellickson pitching out of the bullpen. There are only a few pictures in the gallery, it was a work night so I only went out for Hellickson's time on the mound. Despite what the box score shows, Jeremy was effective on the mound. A post game interview in one of the local papers reported that they were working on his off-speed stuff regardless of the outcome on the scoreboard. When he reverted back to his original arsenal, he was dominate.

Sorry for the quality of the photos, it was much later in the game then most of my photos and my camera does not perform that well when it gets dark at the ballpark. 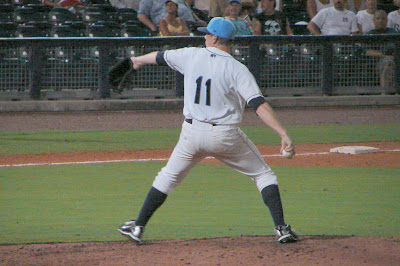 -- By Donten Photography at 9:01 PM
Email ThisBlogThis!Share to TwitterShare to FacebookShare to Pinterest