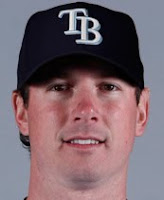 The Tampa Bay Rays have signed outfielder Brad Hawpe to a minor league contract on Friday.

Hawpe was desginated for assignment by the Colorado Rockies last week and cleared waivers on Thursday. Hawpe has spent his entire career in the Rockies organization. He was drafted in the 11th round of the 2000 draft and made his MLB debut on May 1, 2004. He was a minor league All-Star in 2000 (Northwest League) and 2003 (Texas League) as well as a major league all-star in 2009.

Hawpe will begin his career with the Rays organization as a member of the Charlotte Stone Crabs.
-- By Donten Photography at 9:27 PM
Email ThisBlogThis!Share to TwitterShare to FacebookShare to Pinterest