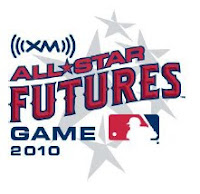 World Futures 1, US Futures 9
Jeremy Hellickson earned the victory, pitching 2 innings and allowing a run on 2 hits was a strikeout. Desmond Jennings scored 3 runs despite not recording a hit, also swiped a base. Alex Torres pitched a shut-out inning with 1 hit.

Durham Bulls 4, Norfolk Tides 5
Dioner Navarro was 2 for 4 with an RBI. Justin Ruggiano struck a three run homer. Anuery Rodriquez pitched a no hit frame. Carlos Hernandez was charged with the loss. Durham begins a three day break for the league all-star game, they return to action on Thursday against Charlotte.

Montgomery Biscuits: Day Off
Biscuits are on the all-star break. Play resumes on Wednesday.

St. Lucie Mets 4, Charlotte Stone Crabs 5
Fourth walk-off win of the year for the Stone Crabs. Jake Jefferies was 3 for 4 with 2 RBI's and scored the winning run on a passed ball. Chris Murrill extended his hitting streak by going 1 for 4 with an RBI. Anthony Scelfo was 1 for 3 with a triple. Matt Moore gave up four earned run including 3 home runs in 5 innings pitched. Zach Quate picked up the win. Shane Dyer makes the start in Monday's rubber game against St. Lucie.

Hudson Valley Renegades 6, Mahoning Valley Scrappers 4 (12 innings)
Philip Wunderlich was 3 for 6 with 2 doubles, an RBI and a run scored. Diogenes Luis was 2 for 5 with a double and 3 RBI's. Steve Tinoco drove home two runs. Jacob Thompson pitched 3 shut-out innings. Omar Bencomo earned the victory. Both clubs are back at it again on Tuesday night.

Princeton Rays 0, Burlington Royals 2
Ruben Contreras was 2 for 4. Brian Harris was 2 for 3. P-Rays offense stuck out 8 times and stranded 5 runners on base. Jacob Partridge was charged with the loss. Enny Romero will start for the P-Rays in Monday's game at Burlington.

GCL Rays: Day Off
GCL Rays return to action on Monday with a road game against the GCL Twins.

DSL Pirates 10, DSL Rays 6
Jiminson Natera was 2 for 5 with a double and 2 RBI's. Jesus Araiza was 2 for 4. Hector Rodriguez was 2 for 5 with an RBI and a run scored. Adderly Rosa was 1 for 2 with 4 walks and 3 runs scored. Ariel Soriano and Julio Medina also drove home runs. D-Rays were 1 for 20 with runners in scoring position. Luis Mercedes was charged with the loss. DSL Rays play the DSL Yankees at home on Monday.