(Note: Bumped back to the top since it was a busy weekend. Originally published 8/5.)

After looking at the pitching prospects in my last breakdown (nearly a month ago) I’m going to take a look at the Rays hitting prospects today. I'm very sorry for the long interruption in my posts. My summer holidays in the Pacific Northwest (Vancouver, Seattle, Portland), including my second live MLB game (a dominant Jeremy Hellickson performance in Safeco Field paired the excitement of watching Desmond Jennings play and also sum dumb base running), are to blame for that. Anyway, here is my breakdown of the Rays minor league hitting prospects.

Other than in my last hitting prospects breakdown, now also the short season ball numbers tell us a lot. Overall I have to be pleased by the performance of the hitting prospects in the system. The top 15 pre-season hitting prospects diminshed a bit with a .263 - .353 - .763 - .329 (AVG - OBP - OPS - wOBA) line, but nevertheless the Rays finally have some very intriguing hitting prospects. Some already help the big league club (Jennings, Chirinos, ...), some are close behind (Canzler, Guyer, ...), some enter the upper levels soon (Bortnick, Lee, ...) and some, while still in the lower levels, could finally provide the Rays with above average power potential (Dietrich, Malm, Vettleson, ...). 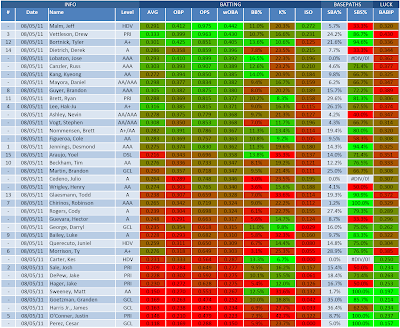 4 prospects on the rise

I’m sorry for not mentioning other very well performing players like Tyler Bortnick (NEEDS A PROMOTION!!!), Oscar Hernandez (Doug is watching him closely in his series of posts), Cameron Seitzer and Taylor Motter (ALSO IN NEED OF A PROMOTION), Russ Canzler (has to get a chance in the bigs in September) and Desmond Jennings (finally up for good).

All of the stats provided above are excluding the stats from the previous day. I preferrably use 3 sources for the stats. Click on each stat for its explanation:
-- By BurGi at 7:10 AM
Email ThisBlogThis!Share to TwitterShare to FacebookShare to Pinterest