After looking at the hitting prospects in my last breakdown I’m going to take a look at the Rays pitching prospects today. 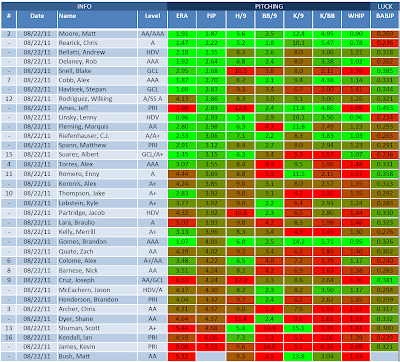 There is serious concern in the Rays blogosphere about the minor league high end starting pitching talent. So, I'm a bit focusing on pitching talents in the lower minors now, leaving Matt Moore (we all know about him), Alex Cobb (out for the rest of the season), Chris Archer (control problems), Alex Torres (turning it around?) and Alex Colome (low strikeout rate concerns me a bit) out of the picture.

In A/A+ there are lots of question marks. Enny Romero by far has the highest upside and I only see his abysmal command (5.3 BB/9 on the season) holding him back. His other peripherals are excellent. Wilking Rodriguez as well as Joe Cruz and Albert Suarez just came back from injury. All of them have legit starting pitching potential while also having lots of question marks (some related to health reasons, some to secondary offerings). I'm just glad to see them pitch again and I'm very confident that at least one major league starting pitcher comes out of this bunch. C.J. Riefenhauser on the other side was injury free and looks excellent this season. The question is: Will he become an Alex Cobb-type (who dominates with excellent command and pitchability) or more of an Heath Rollins-type (who had to realize that his stuff was not good enough for the majors)? Only time will tell. All the others in A/A+ (Jake Thompson, Merrill Kelly (both not missing enough bats; impressive groundball rate by Kelly, though), Alex Koronis, Kyle Lobstein, Jason McEachern and George Jensen) will have to make a jump in order to become a major league starter. Most of them (Thompson, Kelly, Koronis) are better suited for the bullpen anyway.

In short season ball there have always been lots of raw pitching talents in the Rays farm system. Is it the same way this year? Andrew Bellatti (doing very well in HDV), Parker Markel (excellent scouting reports), Ryan Carpenter (15 IP, 8 H, 1 BB, 14 K in HDV), Ian Kendall and Jeff Ames (FB first guys who will have to improve), Blake Snell, Jakob Faria (15.2 IP, 15 H, 1 BB, 14 K in GCL), Brandon Henderson, Matt Spann, Pedro Silvestre, Stepan Havlicek, Geisel De la Cruz (DSL Rays) are all names who could emerge into high end starting pitching prospects one day. The two most impressive SP prospects not in full season ball, however, haven't taken the field for the Rays yet. Tyler Guerrieri and Jesse Hahn (any update on his injury out there?) do have the arsenal of an excellent, front of the rotation pitcher.

So, while I also think that there is a bit less top-of-the-rotation talent in short season ball (as well as less mind blowing stat lines for pitching prospects than in previous years) right now, I think we shouldn't be concerned as of yet. All it needs is one or two of the players named above (and the pitchers I forgot) to take a step forward. We have seen it lots of times in the past and it will happen with this bunch again. Especially guys like Ryan Carpenter or Parker Markel could emerge as top notch pitching prospects down the road.

The stats from StatCorner and FanGraphs provided above are excluding the stats from the previous day. I preferrably use 3 sources for the stats. Click on each stat for its explanation:

-- By BurGi at 10:30 AM
Email ThisBlogThis!Share to TwitterShare to FacebookShare to Pinterest