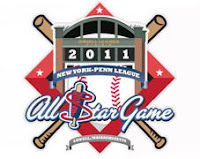 The Hudson Valley Renegades will be sending five players to the annual all-star game in Lowell. Charlie Cononie, Robert Dickmann, Jeff Malm, Parker Markel and Matt Rice will be representing the American League All-Stars. Only the Batavia Muck Dogs have more players nominated to this years team.

Cononie has only allowed one earned run all season and has a 0.38 ERA in 13 games this year. Opposing hitters are just .149 against him this season.

The 2011 New York-Penn League All-Star game will be played on August 16 at LeLacheur Park, home of the Lowell Spinners.
-- By Donten Photography at 1:28 PM
Email ThisBlogThis!Share to TwitterShare to FacebookShare to Pinterest