With the draft not even a month from now we are going to lay out lots of draft coverage from now on. We follow this draft class even more closely as the Rays have 10 selections in the 1st round and 12 in the first two rounds. Andrew Friedman already pointed out that the 6th-8th of June are the most important days in Rays history. And they will spend.
Kevin and Doug started by pointing out some hitters to watch and by also posting a college pitcher follow list. In the coming weeks we are going to post more scouting reports on interesting prospects. Today, however, I'm going to post a cummulative prospect ranking list and the chance of each of these prospects to be available at the Rays 1st (24th overall) and 2nd/3rd pick (31st and 32nd overall).
For the prospect rankings I've combined the rankings by ...
I took these sources as they seem to be fairly accepted in the scouting industry (and as they are free). If you know of any up-to-date prospect rankings I should also add, please let me know.
Then I looked at the following mock drafts in order to know where these ranked prospects are expected to be taken. I, again, concentrated on 4 sources:
Again, if you know any other widely accepted and up-to-date mock drafts, please let me know.
The following table then shows you, how the prospects in this draft are being ranked and which prospects are available for the Rays first 3 picks: 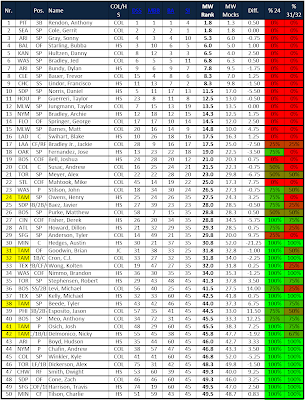 (Click at the table for a larger view)
Going by the rankings, Jose Fernandez (a local power arm), John Stilson (high effort starter who has great stuff, but could wind up closing), Henry Owens (good FB, big curve, excellent potential) and Javier Baez (toolsy prep-IF who does it all. Could wind up as a 2B/3B or even C) are the highest likely top prospects to fall to the Rays. In fact, BA and Jon Heyman mocked Jose Fernandez as the 24th pick while Prospect Junkies projected the Rays to select Owens 24th overall. They all are very impressive talents for a 24th selection (while I would stay away from a pitcher who has a high chance of winding up in the pen with this selection --> no Stilson) and this is one sign for the incredible depth of this years' draft. All of them are high potential picks and I like them for the Rays while still hoping for anybody of Josh Bell, Mikie Mahtook or Daniel Norris falling to 24.
Considering the Rays' 2nd and 3rd selection, Derek Fisher (prep COF, some say he has the top HS power potential), Anthony Meo (#2 starter ceiling) and C.J. Cron (C/1B; very advanced power bat; destroys NCAA pitching) are the highest ranked likely available prospects according to the sources. I would be so happy if the Rays could land 2 of these 3 with the 31st and 32nd selection. Especially C.J. Cron is repeatedly (BA, MiL-Ball and SBN) mocked as the Rays 2nd selection. He fills maybe the only immediate need of the system (a fast advancing power bat) while still being a value pick. I hope the Rays to select him either here or with one of their later picks (24 is too early).
And ... as you all know, it's not over after the 1st round. The Rays have 7 more picks in the 1st supplemental round and then 2 more in the 2nd. And, what can I say ... the talent is very, very deep in this range! The Rays will come away with a high amount of high quality picks! I can't wait for the draft to finally happen.
-- By BurGi at 11:17 AM
Email ThisBlogThis!Share to TwitterShare to FacebookShare to Pinterest