This time I tried something different. I wanted to calculate my top prospect list in a way which diminishes (at least a bit) the influence of my own gut feelings and which is more objective. Therefore I chose and weighted 4 criterias which should evaluate a players' prospect status. I'd like to make them transparent here in order to get some input from you guys. Before posting them I wanted to say that especially the weights of the criterias is a preliminary one and that I'll keep monitoring and adjusting them. A player can achieve a grade between 0 and 10 in each criterion. I've analysed 94 current Rays prospects with this method:
Okay then ... that's the "method" and here are the results (if anybody wants the .xlsx-Sheet, just mail me): 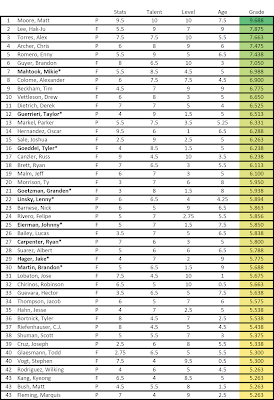 (Click at the image for a larger view)
Some tidbits to the ranking:
-- By BurGi at 8:00 AM
Email ThisBlogThis!Share to TwitterShare to FacebookShare to Pinterest