When to draft college guys and when HS players?

I was looking at the recent Rays drafts and I started to figure out kind of a tendency. I’m sure the Rays mostly go with the best player available approach (maybe taking signability a bit into account), but maybe they are weighing college guys and the higher security that comes with them more in a particular spot while weighing the more developable players more in another spot.

First I looked at the, by the Rays drafted, players on the 40 man roster and the round as well as the level (COL, HS, CC) these players were drafted out of. I didn’t take ex-players (CC, Rocco Baldelli, Johnny Gomes) into account as they were developed in the minor leagues before the Friedman-regime took over. Looking at the table below we see that only 4 players out of college (not counting CC) are on the 40-man roster. 3 of them have been taken within the first 4 picks of the respective drafts. Only Andy Sonnanstine made it to the majors while being drafted later than the first round. Of the 8 HS draftees on the roster only one of them was drafted in the first round. This tells me that the Rays are way better in finding later round gems out of high school than out of college. They even found above average MLB starters in rounds 3 (Davis), 4 (Hellickson) and 16 (Shields). And don’t forget about Alex Cobb (4th round) and top prospect Matt Moore (8th round, 2007). The Rays are really good in finding top pitchers later on as they are exceptionally well in developing them. 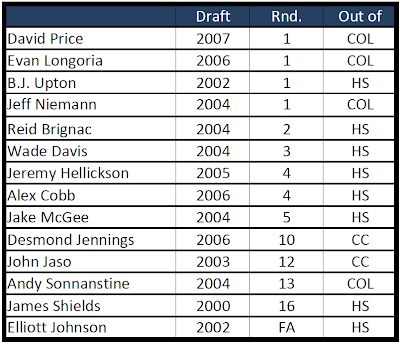 Looking at the drafts from 2006-2009 which are the first 4 drafts of the Friedman-regime we can see a similar picture (I didn’t take 2010 into account as it’s way too early to tell for these prospects). While the first rounders out of college (namely Evan Longoria and David Price) have been perfect selections, the Rays couldn’t find any top prospect out of college later than in the first round (Tyler Bortnick seems to be the best later COL pick). High college picks like Josh Butler (2nd round, 2006), Will Kline (2nd, 2007), David Newmann (4th, 2007), Jake Jefferies (3rd, 2008) and Mike Sheridan (5th, 2008) have not developed as hoped. At least the 2010 draft looks a bit better with Derek Dietrich and Jake Thompson. Meanwhile, the HS selections from 2006-2009 brought lots of potential future major leaguers to the system (Moore, Morrison, Barnese, Cobb, Beckham, Bailey) while only Tim Beckham was a first round pick.

So … what does this tell me for the upcoming draft? The Rays like it to draft nearly finished college guys whom they like very much early on (who doesn’t?). And as this draft is pretty deep also in the college ranks, I think they’ll take one or two nearly finished college guys and/or a guy they like very much while not being that polished in the first round. The names that come to my mind are Kolten Wong, C.J. Cron and Tyler Anderson as very far developed quality picks and Mike Mahtook (higher upside but with some holes in his swing), Alex Meyer (exceptional upside, control problems) and Anthony Meo (#2 starter potential, lacks a bit polish) as picks the Rays could love cause of their upside. They all are legitimate candidates for the selections 24, 31 and 32. After that I do think that the Rays will only go the college route if they think that the respective player has ways to go in his development, but therefore a high ceiling. Names popping to my head are for example Jack Armstrong out of Vanderbilt, Ryan Carpenter whom the Rays drafted 3 years ago. Other than that I think they’ll go with lots of prep picks after the first round. There will be lots of excellent HS players available in the first supplemental round for example.

So … I see the Rays taking 2 college players in the first round if they think the talent level is as deep as everybody says. They won’t draft a college player in the first round if the upside is not at least that of an average major leaguer. Later on I see them going more the HS (and CC) route. They’ll mix in some college picks (some to save money and some they particularly like) here and then, but the amount of prep talent they can select will simply be way too enticing for them. Look at the success rate they have when developing HS kids, especially pitchers. Of the 7 supplemental round and 2 2nd round picks I see them at least going with 5-6 prep players.

Based on John Sickels mock draft (1st rnd., 1st supp. rnd.) and the players available at his draft for every Rays pick) I like the following selections for the Rays. What do you think?

-- By BurGi at 9:00 AM
Email ThisBlogThis!Share to TwitterShare to FacebookShare to Pinterest