Some players rising up draft boards:
With the depth of this draft class, I see lots of teams with top 15 selections settling for signable guys. Thus, lots of COL pitchers will be selected in the top 15. I expect 8 COL pitchers to be signed before the 16th pick (Cole, Hultzen, Gray, Bradley, Bauer, Barnes, Jungmann and Meyer).
Some players falling down draft boards:
Nearly all players listed in this category are falling because of their high bonus demands
Cumulative draft board:
In my last post about this I've had 4 mock draft sources included (BA, John Sickels, Prospect Junkies, SB-Nation Mock). Including the latest mocks by PG Crosschecker/Perfect Game and Jim Callis (Baseball America), the cumulative draft board looks like this: 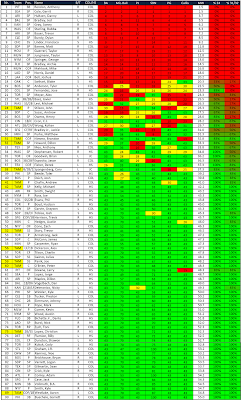 (Click at the image for a larger view)
The top 17 talents won't fall to the Rays according to these experts and I agree with them. The 8 COL pitchers will definitely not fall as well as the COL hitters (Rendon, Springer, Mahtook). Dylan Bundy and Archie Bradley could fall, but not far enough while Tyler Guerreri and Daniel Norris seem to be more signable. Josh Bell, Bubba Starling and Francisco Lindor also won't be available with the 24th pick as it looks like. I also don't expect Alex Meyer (21st on the list) to be available at 24.
-- By BurGi at 3:38 AM
Email ThisBlogThis!Share to TwitterShare to FacebookShare to Pinterest