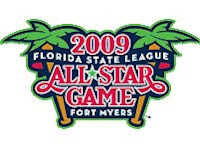 The Game:Despite a heavy rain that fell during the middle portion of the game, the Florida State League All-Stars still manage to shine before fans at Hammond Stadium. The North Division ended up with the victory 6-4.

Both pitching staffs threw shut-out innings through three innings but it was the top of the fourth that broke it open for the North Division. The North rocked Jupiter’s Kris Harvey for six runs in the inning capitalized by an inside the park home run by Starlin Castro. Moises Sierra hit an RBI single to score Logan Schafer. Lee Haydel hit a line drive to center that scored Robinson Chirinos and Moises Sierra. Then it was Eric Farris with a two run triple to score Haydel and Zelous Wheeler to give the North Division a 6-0 lead.

The South Division mounted a rally in the bottom of the fifth inning and posted four runs to the scoreboard. Ben Revere drove in the first run of the inning with a double that scored Francisco Pena. Chris Cates followed, scoring on a wild pitch. Revere then came home on an RBI single by Shane Peterson. Greg Sexton hit a sac fly to right that scored Peterson and bring the South Division within two runs of the lead 6-4.

Both clubs settled down and the pitcher regained control of the contest. Neither team could put another run on the board and the North Division held on to the win 6-4.

Thad Weber of Lakeland was the winning pitcher and Kris Harvey of Jupiter was the losing pitcher. Starlin Castro of Daytona went 4 for 4 with an inside the park home run to win the All-Star Game MVP. Chris Parmelee of Fort Myers was the winner of the pre-game home run derby.

How Did The Stone Crabs Do: Cody Cipriano was 1 for 5 with a single and 3 strikeouts. Greg Sexton was 2 for 2 with an RBI and a walk. Darin Down pitched the second inning only allowing 1 hit. Matt Gorgen pitched the hitless ninth only allowing 1 walk.
-- By Donten Photography at 9:07 AM
Email ThisBlogThis!Share to TwitterShare to FacebookShare to Pinterest