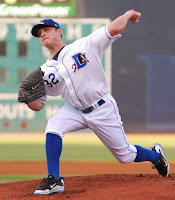 Scott Kazmir was effective and efficient with his pitches on Monday night in a rehab outing with the Durham Bulls. Facing Boston superprospect Clay Buchholz and the Pawtucket Red Sox in front of a packed house in Durham, Kazmir needed only 78 pitches to get through six innings before his night ended. The lefty allowed just one run on five hits with five strikeouts. Furthermore, two of the runners were called out attempting to stretch their singles into doubles. The most encouraging sign for Kazmir though is that he was throwing strikes and going right after hitters. Of his 78 pitches, 55 were thrown for strikes and he did not walk a batter, something that we all know has been a problem in the past for Kazmir.

From a stuff standpoint, Kazmir was basically the same pitcher that he’s been the past two years when healthy. His fastball sat comfortably at 90-92mph and hit 94 on a few occasions with good tailing action when he kept it down. His final pitch was a 93mph fastball to Chris Carter that was hit up the middle to Reid Brignac who showed good range to his left for the 6-3 putout. Kazmir’s changeup was particularly good tonight as well. Thrown around 78-82mph, he threw the changeup frequently to right handed hitters and induced multiple awkward swings with the pitch and two strikeouts. His slider was still a quality pitch around 83-84mph and accounted for three of the strikeouts. Nonetheless, the pitch lacked the great sweeping and downward movement that it had in 2007 when he led the American League in strikeouts but it’s been that way for much of 2008 and 2009.

-- By Andrew Leslie at 11:26 PM
Email ThisBlogThis!Share to TwitterShare to FacebookShare to Pinterest