It's time for the 2nd breakdown of the minor league hitting prospects as most prospects have had at least 70 PA's. Even Josh Sale was allowed to participate in full-season ball. And while he is the Rays minor league leader according to OPS and wOBA, please keep in mind that it only have been 10 PA's.

After an above average start into the season of our MiL hitters as a group (lead by Tyler Goeddel, Henry Wrigley and Brandon Guyer), their performance level dimished a bit and stabilized at an overall .687 OPS over the last two weeks. Better pitching performances, however, have at least ended the End-of-April drought of our upper level clubs in Durham and Montgomery. The hitting prospects as a group, however, are still ranked favourably to their pitching colleagues at every level.

It's the same thing every year. Lots of prospects who might have flown under the radar surprise with excellent performances, while others who seem to be destined for a breakout struggle. That's the nature of human beings and that is also the fun of athletic competition. With Kyeong Kang, Henry Wrigley and Cole Figueroa three lesser mentioned prospects have shown the top performances in the Rays minor league system. While repeating and being overage prospects for their respective level (Figueroa has already been promoted to AAA; the other two should follow within a month or two), their performances have to be credited. On the other side, lots of the top hitting prospects struggle (e.g.: Mikie Mahtook, Tim Beckham and Hak-Yu Lee; Lee is slowly coming back with a .751 OPS over his last 71 PA's, however).
Here is the data: 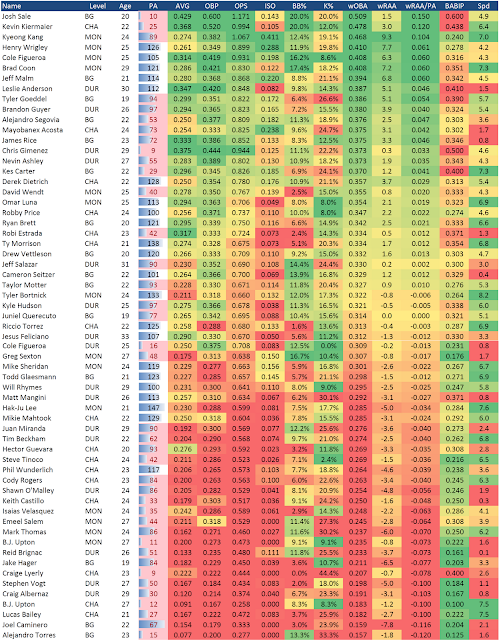 
All of the stats provided above are excluding the stats from the previous day. I preferrably use FanGraphs as source for the stats. Click on each stat for its explanation:
-- By BurGi at 8:32 AM
Email ThisBlogThis!Share to TwitterShare to FacebookShare to Pinterest