The Game: Wilmer Almonte (pictured) got his second start of the year for the GCL Rays after having a solid outing on opening day against the Twins. He had a solid first and second frames, going 1-2-3 in the first and only surrendering a walk in the second. Things got out of control a little in the third, with two runs scoring, one on a single by Hyeong-rok Choi and the other via a groundout by Oswaldo Arcia. Almonte would pitch solidly for most of the rest of his outing, going 5 innings and allowing 3 earned runs on 5 hits, striking out 2. 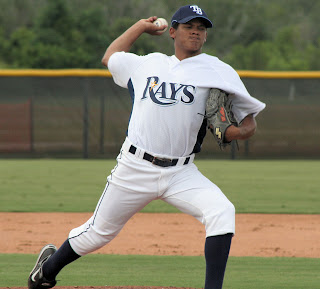 The Rays offense struggled, only managing 4 hits. Claudio Fukanaga was the only Ray to have a multi-hit game, and Felix Gonzalez got the only extra base hit, on a double. Fukanaga had 2 RBIs, and Luis Marchena drove in the other Rays run.

After many consecutive games with a solid showing from the bullpen, they had an awful day this afternoon. Jose Monegro pitched 3 innings in relief of Almonte, allowing 3 earned runs. Jose De La Cruz took over the mound after Monegro, and had an absolute disaster of an outing. He surrendered 6 earned runs in only a third of an inning, allowing 4 hits and 2 walks. Elvin Perez pitched the final 0.2 innings, allowing 1 earned run on 2 hits.

What went right: Nothing much. Wilmer Almonte had a decent outing, allowing 3 runs in 5 innings of work.

What went wrong: Relief pitcher Jose De La Cruz allowed 6 earned runs in only a third of an inning of work out of the bullpen.

The road ahead: The Rays have tomorrow off and will travel to Fort Myers to play the Red Sox on Tuesday.
-- By Nick Hanson at 3:55 PM
Email ThisBlogThis!Share to TwitterShare to FacebookShare to Pinterest