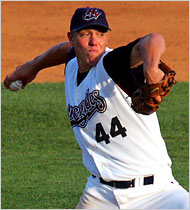 [EDIT] Apparently the report is false

His CBSSports page has it.

Sad, though not at all unexpected news. Townsend was one of Rice's "Big Three" from the 2004 draft, when he was taken by Baltimore. The two sides failed to reach terms, and he entered the draft next year and was selected by the Rays. He debuted in Hudson Valley in 2005 and then played in the Arizona Fall league, but almost immediately needed Tommy John surgery, the first of his major surgeries. He last pitched in the Arizona Fall League in 2008, where he again had to leave early due to a major injury, this time a torn labrum.

The news is particularly disappointing for the Rays considering the strength of the 2005 draft(of the top 12 picks, only Townsend has not appeared in the majors).
-- By Riven G at 2:14 PM
Email ThisBlogThis!Share to TwitterShare to FacebookShare to Pinterest