- Named a Second Team 5A All-State selection by the Kansas Baseball Coaches Association as a senior at St. Thomas Aquinas (Kan.) HS.

- Committed to University of Dayton.

- Also played football and was an All-5A Honorable Mention as a wide receiver.

It wasn’t unexpected — Henning said he had conversations with the Rays and Royals before the draft — but it was still a dream come true. “I went down to the Rays’ pre-draft (camp), and I ran a 6.4 (60-yard dash),” Henning said, “so my speed helps me out.”

Henning has signed to play in college at Dayton, but he said he may be taking a new path if everything falls into place. “We haven’t talked all the negotiations and that stuff yet,” Henning said. “But I’m pretty sure I’m gonna go play. That’s what I want to do.”

- In 2011 helped his high school team win its third state title in six years in the Class 5A state final.

- Committed to the University of Oklahoma.

- Previously drafted by the Rays in the 20th round of the 2009 June Draft but elected to go to college. 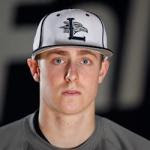 - Ranked No. 316 in Baseball America’s Top 500 overall, No. 36 overall left-handed pitcher and No. 3 prospect out of Pennsylvania.

- Previously drafted out of high school by the Pittsburgh Pirates in the 13th round of the 2010 June Draft and again following his first year at Lackawanna by the St. Louis Cardinals in the 21st round of the 2011 June Draft.

- In his second year at Herkimer County CC, went 6-1 with 91 strikeouts and a 2.62 ERA (58.1-IP, 17-ER) and was selected to the 2012 All Mountain Valley Conference Baseball Team and named a First Team All-Division III performer.

- Began his collegiate career at Austin Peay University in 2009 but transferred after redshirting his freshman year.

- Also competed in both indoor and outdoor track and field at Austin Peay, participating in hurdles and long jump events.

*** SIGNED JUNE 12TH. ***
-- By Kevin G at 8:31 PM
Email ThisBlogThis!Share to TwitterShare to FacebookShare to Pinterest