I do want to point out that I'm not considering the stats of players from short season ball this week. The sample size simply is WAY too small. I'll start considering them with the hitting prospects next week.

Thanks to the Louisville Bats and to a strong week (pitching wise), the Durham Bulls finally are out of last place regarding their pitching performance. This leaves the Montgomery Biscuits and Charlotte Stone Crabs as the "only" two full-season affiliates with the worst pitching staff in their league. On the other side, with the Montgomery Biscuits and the Bowling Green Hot Rods, two hitting staffs are best in their respective league.

OPS-CH and ERA-CH stands for the OPS and ERA change since the last minor league breakdown. Overall ERA and OPS are from ALL affiliates (including DSL, VSL and short season ball affiliates)

ERA change since the start of the season

The cells with grey background show you the position players who have taken the mound so far this season. And while the sample size is more than small (8 IP combined), they did very well! Here is the data: 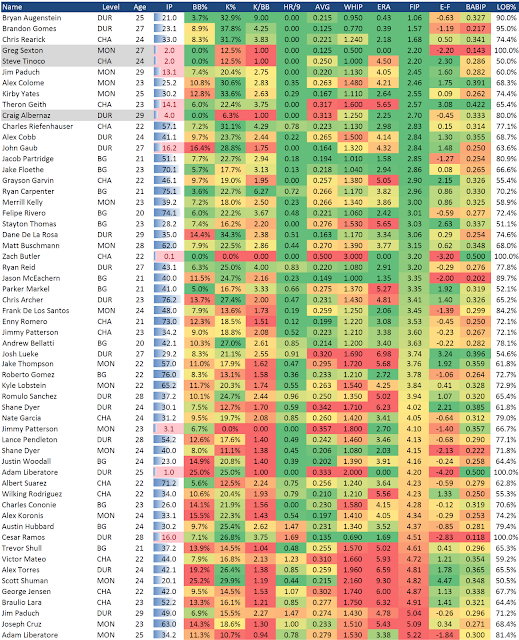 Prospects to be falling
Glossary
All of the stats provided above are excluding the stats from the previous day. I preferrably use FanGraphs as source for the stats. Click on each stat for its explanation:
-- By BurGi at 6:35 AM
Email ThisBlogThis!Share to TwitterShare to FacebookShare to Pinterest