Nearly a month has gone by since my last minor league breakdown of the hitting prospects. Since then, the Rays MiL pitching has gone backwards again. The Durham Bulls, the Montgomery Biscuits AND the Charlotte Stone Crabs are last in pitching in their respective leagues. Only the Hot Rods have an above average pitching staff (2nd). On the hitting side, not much has changed, though. The Hot Rods moved into 1st place according to OPS, though, which is a result of a very balanced offense - led by Josh Sale and Jeff Malm.

Today I'm going to talk a bit about specific warning signs to look out for when trying to evaluate whether a hitter's offensive performance is sustainable or whether a hitter can make it in higher levels. An excellent indicator for the latter (success at higher levels) is the strikeout-rate (K%). Only a very limited number of elite hitting prospects is able to be successful at the major league level with a high level of strikeouts in the minors (e.g.: Ryan Howard, Giancarlo Stanton). More often than not, though, players with high strikeout numbers falter at the major league level (e.g.: Brandon Wood, Kila Ka'aihue, Travis Snider, Jeff Clement, ...). Especially the combination of a low batting average AND a high strikeout rate most of the time is deadly for a hitter. Therefore, especially Kyeong Kang (28,4 K%, .247 AVG) and Tyler Goeddel (28 K%, .250 AVG) have such warning signs. Power hitters like Henry Wrigley or Jeff Malm also have to be cautious, not to make insufficient contact.
Here is the data: 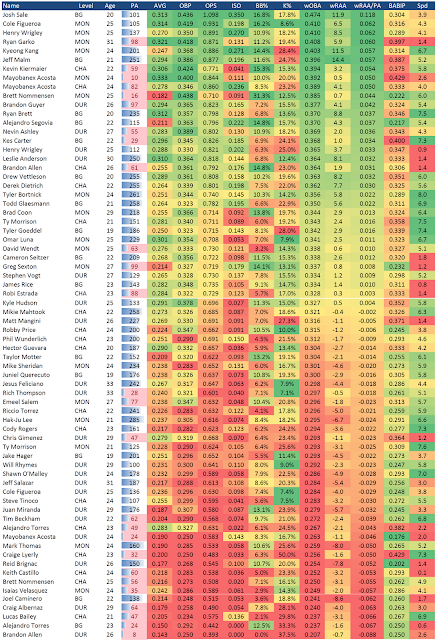 Prospects on the rise
Prospects to be falling


All of the stats provided above are excluding the stats from the previous day. I preferrably use FanGraphs as source for the stats. Click on each stat for its explanation:
-- By BurGi at 10:33 AM
Email ThisBlogThis!Share to TwitterShare to FacebookShare to Pinterest