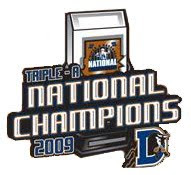 [Via email from the Durham Bulls Director of Media Relations/Promotions Matt DeMargel.]

Durham, NC: This Thursday night beneath the Lucky Strike Tower in the American Tobacco Historic District, Durham will host a celebration of national champions.

The championship celebration is a collaboration between the Chamber, DCVB, the City and the County governments, the Durham Bulls and American Tobacco to show their strong collective support of the teams that help make Durham known as the “City of Champions.”

At 6:30 p.m. across the street, the Night of National Champions continues at the Durham Bulls Athletic Park when the pre-game fun begins before the Bulls take on the Norfolk Tides.

Durham Bulls’ Manager Charlie Montoyo will be presented his award from Baseball America for being named the 2009 Minor League Manager of the Year. Montoyo, who has won three division titles, a Governors’ Cup Championship and a National Title in his three seasons with the Bulls, is the first Durham manager to win the award since the Bulls moved to Triple-A in 1998.

The Young Marines Color Guard will present the flag, then the Duke University Pep Band will perform the National Anthem.

During the third inning, the entire Duke Basketball team will take the field giving fans in the Triangle the opportunity to congratulate them on their National Title. The National Title trophy will then be placed on the main concourse where fans can have their picture taken.

The Chamber is the sponsor of the Opening Night at the Durham Bulls Athletic Park. Chamber member businesses will have the opportunity to showcase their products and services to game goers along the stadium concourse, and Tony Pugliese, the Chamber's Chair of the Board will be presented the game ball during the third inning.

The pre-game celebration at the American Tobacco Campus is free and open to the public. The Bulls and Norfolk Tides square off at 7:05 p.m. before an anticipated full house at the Durham Bulls Athletic Park. Tickets are available now at the park, online at www.durhambulls.com or by phone at (919) 956-BULL.
-- By Donten Photography at 4:05 PM
Email ThisBlogThis!Share to TwitterShare to FacebookShare to Pinterest