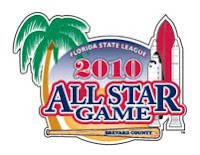 The Stone Crabs will be sending a league leading nine players as well as the entire coaching staff to the game to represent the South Division. They will be joined by members of the Bradenton Marauders (Pirates), Fort Myers Miracle (Twins), Jupiter Hammerheads (Marlins), Palm Beach Cardinals and St. Lucie Mets.

The will be opposed by the North Division led by the coaching staff of the Tampa Yankees and joined by members of the Brevard County Manatees (Brewers), Clearwater Threshers (Phillies), Daytona Cubs, Dunedin Blue Jays, Lakeland Flying Tigers and Tampa Yankees.

The weekend's festivities will be kicked off Friday night with the All-Star Gala and Cocktail Hour. Then Saturday the players will participate in an autograph session at the Brevard Zoo followed by "A Taste to Celebrate Space" food contest. The home run derby is scheduled to begin at 6. Followed by the All-Star Game at 7:35 with fireworks to follow the game, rounding out a perfect weekend of baseball.

The game can be listened to online by visiting www.spacecoastbaseball.com, coverage begins at 7:00 PM and a complete wrap up can be found later on Rays Prospects.
-- By Donten Photography at 11:21 PM
Email ThisBlogThis!Share to TwitterShare to FacebookShare to Pinterest