Hot Rods Come From Behind for 3-2 Win 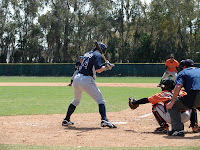 Bowling Green, KY – Tyler Bortnick hit a game-tying two-run home run in the eighth before Chris Murrill delivered the game-winning blow in the ninth to send Bowling Green to a 3-2, walk-off win against the West Michigan Whitecaps on Saturday night. The victory is the Hot Rods 30th of the season, their 9th in the month of June, and evens their series with West Michigan heading into the first half finale on Sunday afternoon.

The late-inning heroics began in the eighth inning for the Hot Rods with two outs. Whitecaps pitcher Nolan Moody was in his fourth inning of work and had retired the first two batters of the inning without issue. But Moody then issued a two-out walk to Kyle Spraker. That proved to be a costly mistake as Bortnick drilled a two-out, two-run homer into the Home Run Grill to tie the game up at 2-2.

Bortnick’s second blast of the series and his fifth of the season and gave the Hot Rods a chance in the ninth. After Deivis Mavarez worked a scoreless top half, Kenny Faulk took the hill for West Michigan in the bottom half.

The lead-off man in the ninth, Mark Thomas, doubled down the left field line, leading to the ejection of West Michigan manager Joe DePastino, who argued that the ball was foul. After an intentional walk to Gabe Cohen, Thomas was retired at third on a failed sacrifice bunt from Julio Cedeno for the first out of the inning.

Brett Nommensen followed Cedeno as a pinch-hitter for Diogenes Luis, but he struck out for the second out of the inning. That brought up Ty Morrison, who worked a walk to load the bases for Murrill. The Hot Rods outfielder, 0-for-8
in the series until that point, hit a ground ball to first base that squirted through the legs of Tony Plagman to score the game-winning run.

Mavarez earned the win in relief, his first of 2010. He capped off another strong night for Hot Rods pitchers who allowed just one earned run. Kirby Yates took a no-decision allowing one run in a career-high six innings. He finished with six strikeouts in his third professional start. Jake Sullivan followed out of the bullpen, allowing an unearned run in the seventh before working a scoreless eighth.

Bortnick and Murrill will gather most of the headlines for their part in the game, but Thomas had the best night offensively, going 4-4 with a double, three singles, and his fifth stolen base of the season. He has hit safely now in six straight games, going 11-22 (.500) during the run.

The season series between the clubs is now even at four wins each heading into the final game on Sunday afternoon. LHP Kyle Lobstein (3-3, 4.62) draws the start against RHP Trevor Feeney (6-5, 3.59). First pitch is at 2:05 PM. You can follow the game with Tom Gauthier and Hank Fuerst at 1:50 PM on 1340 WBGN and www.bghotrods.com.

Sunday is Father’s Day and dads can play catch on the field with their children immediately following the game. Kids 14 & under can also run the bases after the game in the Smucker’s Uncrustables Fun Run. For tickets, call 270.901.2121 or visit www.bghotrods.com.
-- By Donten Photography at 8:44 AM
Email ThisBlogThis!Share to TwitterShare to FacebookShare to Pinterest