Biscuits Start Second Half with Win 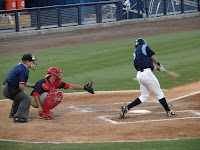 [Game recap provided by Joe Davis of the Montgomery Biscuits.]

MONTGOMERY, AL – Leslie Anderson and Emeel Salem each homered, and the Biscuits (1-0) held the West Tenn Diamond Jaxx (0-1) to four hits in a 4-3 win to begin the second-half Tuesday at Riverwalk.

Anderson’s homer came in the sixth against Jaxx starter Steve Bray to break a 2-2 tie. Salem hit his one inning later off Robert Rohrbaugh. It was the second for Salem over his last three games, and the third in his career.

Biscuits starter Alex Torres walked the first two Jaxx hitters to begin the ballgame, and after an infield single, a bounce out to second from Johan Limonta plated the first run of the evening. They’d add one more on another grounder to make it 2-0.

The Biscuits, though, answered quickly. Salem started the first off with an infield single, and after Rashad Eldridge reached on a fielder’s choice with Salem being forced out at second, Nevin Ashley tripled to dead-center to cut it to 2-1. Chris Nowak followed with a sac-fly to score Ashley and tie the game at 2-2.

The Jaxx would plate their final run on a Limonta homer in the eighth, then Matt Gorgen (14) came on in the ninth to pick up the save.

LHP David Newmann will take the ball for the Biscuits in the series’ second game on Wednesday night against West Tenn LHP Mauricio Robles at 7:05.
-- By Donten Photography at 5:29 AM
Email ThisBlogThis!Share to TwitterShare to FacebookShare to Pinterest