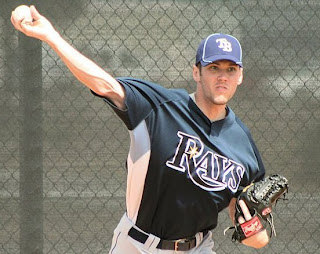 Three releases to report on out of Rays minor league camp, which breaks tomorrow with a 10am intrasquad game. Pitchers Joey Callender and Neal Frontz were released, as was catcher Tyler Hauschild.

Callender, who converted to the mound before the '09 season, spent the year with Princeton, also making a brief stay with Charlotte. Frontz played for AA Montgomery and was a major league spring training invitee in '09. He was ticketed to play for the Biscuits again this year. Hauschild spent last year in extended spring training, eventually catching on with the Bowling Green Hot Rods for the last part of the season.
-- By Nick Hanson at 5:18 PM
Email ThisBlogThis!Share to TwitterShare to FacebookShare to Pinterest