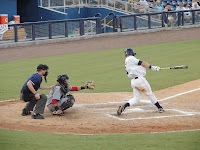 John Matulia drove home a run with a sacrifice fly in the seventh and the Biscuits snapped a three-game losing streak with a 3-2 win over the Huntsville Stars Monday at Riverwalk Stadium.

The Biscuits got on the board in the bottom half of the second on a Matt Fields solo homer. It’s Fields’ team-leading sixth shot of the season. The Stars would answer one frame later, getting a single from Brent Brewer and a double from Martin Maldanado to begin the third. Brewer would come home on a groundout off the bat of Zelous Wheeler to tie things up at 1-1.

Montgomery retook the lead in the bottom of the fifth. After Greg Sexton struck out to start the frame, Cody Strait reached on an error and promptly stole second. Matulia then reached on an infield single, and Strait scored on a fielder’s choice groundout off the bat of Emeel Salem.

Huntsville would even things back up at 2-2 off Dane De La Rosa in the seventh. Andy Machado doubled with one down then moved to third on a sacrifice fly from Juan Sanchez. A two-out single courtesy of Chuckie Caufield scored Machado to tie the game.

Sexton scored the game-winner in the seventh on Matulia’s sac fly after leading off with a triple.

De La Rosa got to 3-0 with two innings of relief work, while Mike McClendon fell to 1-1 in allowing his first run of the season. Matt Gorgen walked two in the ninth but nailed down his league-leading sixth save.

LHP Jake McGee tosses tomorrow for the Biscuits against Huntsville RHP Mark Rogers. It’s the third and final Grand Slam School Day, with the first pitch at 10:35 AM.
-- By Donten Photography at 5:22 AM
Email ThisBlogThis!Share to TwitterShare to FacebookShare to Pinterest