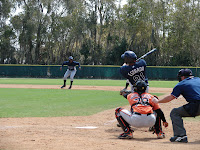 Bowling Green, KY – Kyle Lobstein made a strong bid for back-to-back victories on Saturday night, hurling six shutout innings against the Lansing Lugnuts. Despite his strong start, the Lugnuts rallied for four runs in the eighth inning against Deivis Mavarez to grab a come-from-behind 4-3 victory. The win gives the Lugnuts the series victory with one more game to come on Sunday afternoon.

Lobstein’s solid effort was given early run support in the bottom of the first inning, thanks to the bat of Ryan Wiegand. With runners at first and second, the Hot Rods first baseman stroked a double to right field, scoring Chris Murrill to give the Hot Rods a 1-0 lead. It was nearly 2-0 but Tyler Bortnick was thrown out at home plate on the play. By driving in Murrill, Wiegand has now gone two straight games with a first inning RBI double as he pulled off the feat on Friday night. Two batters later he scored on a Dustin Biell single to give Bowling Green a 2-0 first inning lead.

Neither team had much going through the next four innings as Lobstein continued to dominate the Lugnuts. He was matched pitch-for-pitch by Lansing starter Ryan Shopshire, who settled down after the first inning to throw goose eggs on the board through the end of five.

In the sixth, Lobstein allowed a one-out walk to Ryan Goins, but eventually worked out of that jam to complete his night. He threw six innings for the first time this season, allowing just two hits. He struck out five and walked three and allowed just one base runner to reach second base.

After a scoreless seventh from Jairo De La Rosa, it looked like Lobstein was just counting down the outs until he earned his second victory. Unfortunately, the Lugnuts had other plans.

In the eighth, facing Deivis Mavarez, Kenny Wilson reached on an infield single. He was advanced to third base when Ryan Goins singled to right and Ryan Schimpf walked to load the bases. With still no one out, Mark Sobolewski advanced to the plate and doubled into the left field corner, scoring all three runners to tie the game at 3-3.

The Lugnuts’ bullpen held up their end of the bargain the rest of the way as Matt Wright worked two scoreless frames, earning the win. He turned it over to Steve Turnbull for a 1-2-3 ninth and Turnbull’s second save of the series.

You can follow the game with Tom Gauthier and Hank Fuerst beginning at 1:50 PM on 1340 AM WBGN and www.bghotrods.com.