Bulls Washed Out at Toledo 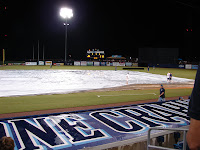 [Via e-mail from Bulls Neil Solodnz.]

(Toledo, OH) Charlie Montoyo’s Durham Bulls didn’t snap a season-long five-game win streak on Friday, but didn’t extend it either. Mother Nature led to a cancellation of the Bulls’ game with Toledo.

The contest never started, as rain begin at about 7:10, and continued until the game was called at 9:05 p.m..

The Bulls finished an abbreviated seven-game road trip through Ohio at 2-5, losing the last five contests. The Bulls have scored six runs in the five games, although Durham still led the league in runs scored heading into action on Friday.

Durham will try to snap the streak on Saturday when the Bulls open an eight-game home stand against Boston’s top farm team, the Pawtucket Red Sox. Tickets are available at www.durhambulls.com. Either Aneury Rodriguez (2-2) or Richard De Los Santos (2-2) will start. First pitch is at 7:05, and coverage on 620 the Buzz begins at 6:50.
-- By Donten Photography at 7:12 AM
Email ThisBlogThis!Share to TwitterShare to FacebookShare to Pinterest