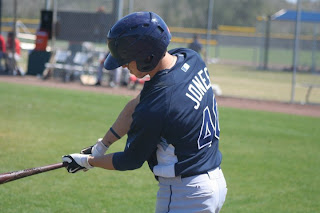 Per Stacy Long's blog, OF DJ Jones retired from the Rays organization on Thursday. Jones was an 11th round pick in the 2007 draft out of high school. He debuted in 2008 for Princeton and hit .227 in 47 games. He spent the 2009 season with Hudson Valley and hit .215 in 47 games for the Renegades. Jones was committed to Auburn, but chose to go professional.

Although nothing has been officially announced, Stacy also reports that 1B/C David Genao, C Luis Bautista, and OF Hunter Pace are not on the latest Rays minor league roster. Genao was an 18th round pick in the 2008 draft, who hit .231 in 2 minor league seasons. Pace was released, according to word at the Rays complex yesterday.
-- By Nick Hanson at 1:03 PM
Email ThisBlogThis!Share to TwitterShare to FacebookShare to Pinterest