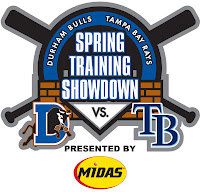 The Game: The Tampa Bay Rays and the Durham Bulls squared off on Saturday afternoon in the inaugural Spring Training Showdown at Durham Bulls Athletic Parks. The sellout crowd witnessed the stars of today taking on the stars of tomorrow in the final exhibition game before the regular season.

The Bulls took the lead early in the first inning. Rashad Eldridge drew a walk then later scored on a home run by Dan Johnson to give Durham a 2-0 lead.

The Rays offense came through in a big way during the second inning, striking for six runs in the inning. Kelly Shoppach put the Rays out in front with a grand slam. Carl Crawford then drove home a run with a single to score Sean Rodriguez. Crawford then scored on an RBI single by Ben Zobrist to give the Rays a 6-2 lead.

Tampa Bay added a few more runs to distance themselves in the fifth inning. Willy Aybar led off the inning with a walk. Matt Hall followed with an RBI triple then later scored on a ground ball by Emeel Salem to increase the lead 8-5.

The Rays added an insurance run in the sixth inning on an RBI double by Gabe Kapler to take a 9-5 lead.

Durham added a run to their tally in the seventh inning as Justin Ruggiano drove home Alvin Colina. Neither club plated another run and the Rays held on for a 9-6 win.

Joaquin Benoit recorded the win and Andy Sonnanstine the save. Jeremy Hellickson was charged with the loss.

A Look Ahead: Both clubs have completed their spring training schedule and are awaiting opening day. The Durham Bulls will begin the 2010 season on Thursday against the Norfolk Tide at Harbor Park. Meanwhile the Rays kick off the season on Tuesday at Tropicana Field against the Baltimore Orioles.
-- By Donten Photography at 10:17 PM
Email ThisBlogThis!Share to TwitterShare to FacebookShare to Pinterest