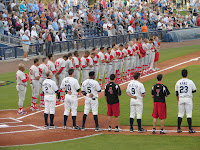 The Game: With a packed house and owner Cal Ripken in attendance, the Charlotte Stone Crabs began their title defense in winning fashion by defeating the Palm Beach Cardinals 4-2 on Opening Day at Charlotte Sports Park.

The game would remain tied until the bottom of the fourth when the Stone Crabs struck for two runs. Matt Sweeney led off the inning with a walk, then advanced to second on a wild pitch. Jake Jefferies singled to right, moving Sweeney to third and giving the Stone Crabs runners on the corners. Michael Sheridan drove home the go ahead run with a double to right that scored Sweeney. Jefferies later scored on sac fly by Reid Fronk to give the Stone Crabs a 3-1 lead.

The Cardinals pulled to within a run of the lead in the sixth inning. Osvaldo Morales, Richard Racobaldo and Xavier Scruggs delivered consecutive singles to load the bases with one out. Morales scored on a wild pitch by Dane De La Rosa. But De La Rosa recovered to strike out the remaining two hitters and get out of the inning with the lead intact 3-2.

The Stone Crabs posted an insurance run in the bottom of the eighth inning. Kyeong Kang drew a walk to lead off the inning. Henry Wrigley followed with an RBI double to left, scoring Kang and giving the Stone Crabs a 4-2 opening day victory, first in franchise history.

Stone Crabs Player of the Game: Matt Sweeney; contributed for two of the Stone Crabs runs and went 2 for 3 with a home run and a double.

A Look Ahead: The Stone Crabs (1-0) will take on the Palm Beach Cardinals (0-1) in game two of the series at Charlotte Sports Park. Nick Barnese (0-0) will start for the Stone Crabs facing Jared Bradford for Palm Beach.
-- By Donten Photography at 5:48 AM
Email ThisBlogThis!Share to TwitterShare to FacebookShare to Pinterest