The number one overall pick in June's draft, SS Tim Beckham was named the Appy's #1 prospect: 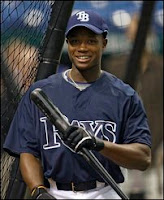 "An outstanding athlete, Beckham has plus hitter's hands, solid pitch recognition and the bat speed to turn around quality fastballs. As he matures, he also should add average power, though he's already solidly built and doesn't project to be much more than an average runner. Beckham is an above-average defender with major league actions at short. His arm is above-average and he gets rid of the ball quickly. As the season wore on, he improved in getting his feet behind him on throws to first base."

"With easy 92-94 mph velocity (and the ability to touch 95) from the left side and a tight, late-breaking curveball, Moore offers true top-of-the-rotation potential. He also fine-tuned his changeup, which runs away from righthanders. Add in plus makeup and competitiveness, and Moore has established himself as one of Tampa Bay's brighter pitching prospects."

And the #9 prospect is RHSP Albert Suarez, who signed as a non-drafted free agent on July 2, 2006, out of Venezuela:

"With a projectable 6-foot-2, 186-pound frame and a clean arm stroke, Suarez has drawn comparisons to countryman Freddy Garcia. His repeatable delivery features terrific downhill plane, and he walked just seven batters in 11 appearances. His curveball has above-average potential but is inconsistent. He also showed aptitude for a changeup that he began throwing in extended spring training, but it also needs refinement."

No time to do an indepth review, but I think it's a fair list. Suarez and Cruz are the only surprises. We'll be rolling out our own Top 20-something lists for pitchers and position players in the coming weeks. To see stats on all of Princeton's pitchers see our Princeton season in review: Pitching.

[EDIT 1:45 by Kevin]: Just chiming in with my quick thoughts here: Obviously we know what Tim Beckham brings to the table. I could not be more excited about Matt Moore right now after reading that report. 93 from the left side with a decent breaking ball and change? Sign me up. Suarez sounds like someone to keep an eye on, particularly with that control that's rare for guys his age.

My early guess is that Beckham and Moore begin 2009 with our low-A affiliate, Bowling Green, while Suarez heads to Hudson Valley. Moore was held back in Princeton already, so if we play it slow with him and send him to HV, I'll be disappointed.

"Q: Ben from Leland Grove asks: With Beckham on the way up, should Brignac be nervous in the coming years, or do you see him as potential trade bait?

A: Matt Eddy: Interesting question, but thankfully for the Rays, it's one they won't have to address for two and a half or three years, when Beckham's minor league apprenticeship ends. By that time, the organization will have a better handle on Brignac's major league potential. More on Brignac when we get to the International League . . .

Matt Eddy: If both Beckham and Brignac develop as expected with the bat, then one of them could shift to another infield position. But that's the beauty of up-the-middle players -- often they can slide down the defensive spectrum to less demanding positions."

"Q: Swig from Boise, ID asks: How good can Matt Moore be? I've heard Scott Kazmir comparisons. Is that type of a ceiling possible for this kid?

A: Matt Eddy: Moore's pitching style compares favorably with Kazmir's, in that both lefties feature power fastballs and hard breaking balls. Moore is more physical, at 6-2, 205, but each of Kazmir's pitches is at least a grade higher.

Matt Eddy: With his mid-90s heat and hard breaker, Moore has top-of-the-rotation potential, but he's so far away that you may want to hold off on the Kazmir comps for now. Remember, Kazmir carved up the New York-Penn League in his debut; he didn't need to repeat the Appy League, as Moore did."

"Q: Doug A. Milhoan from North Canton, OH asks: I was surprised you chose Albert Suarez over his Princeton teammate Joseph Cruz. Thoughts on Cruz?

A: Matt Eddy: That's a fair question. It's easier to dream on Suarez because he's young, projectable and already shows advanced command. For his part, Cruz gets real good extension on his pitches, as he has long arms, and he throws his fastball up to 94 mph. He's a plus competitor who has a strong feel for his changeup, but his breaking ball needs refinement."

"Q: Steve from Orlando asks: Does Matt Moore compare to Jake McGee at the same age?

A: Matt Eddy: Moore already has "more" advanced feel for his secondary stuff, particularly his breaking ball, than McGee did. McGee's fastball is a tick better, however."

-- By Doug at 12:36 PM
Email ThisBlogThis!Share to TwitterShare to FacebookShare to Pinterest