From the press release: The Tampa Bay Rays today named outfielder Fernando Perez Minor League Player of the Year and left-handed pitcher David Price Minor League Pitcher of the Year. The Rays also announced the 2008 players and pitchers of the year for each of their eight minor league affiliates.

By affiliate, with details on the DSL and VSL guys you may not know much about: 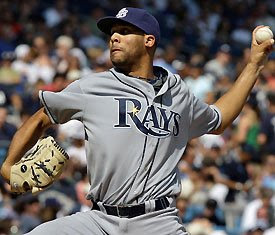 Each of the Rays six minor league affiliates nominated a candidate for the award. Nominees embodied the qualities of Erik, recognized as someone who was a great teammate, a caring person and who enriched the lives of people in need and inspired others to do the same. The other five finalists were: Josh Johnson (Durham), Chuck Tiffany (Vero Beach), Stephen Vogt (Columbus), Tyler Hauschild (Hudson Valley) and Joey Dettrich (Princeton).
-- By Doug at 5:29 PM
Email ThisBlogThis!Share to TwitterShare to FacebookShare to Pinterest