Catching Up With Rocco Baldelli 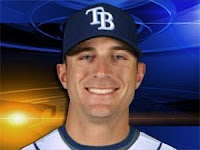 Rocco Baldelli, one of the most popular players in Rays history, was in Bowling Green last week to work with the Hot Rods players. Micheal Compton of the Bowling Green Daily News spoke with him about his career with the Rays, his injuries, last season with the Red Sox, his current role with the Rays, and his possible future as a player. Great interview, make sure to read the whole thing. A few highlights...

Still recovering from the shoulder injury, Baldelli works out with the Rays when they are at home. When Tampa Bay is on the road, he travels across the country - helping to instruct minor leaguers in the organization.

The current Hot Rod that reminds him of himself:

“[Ty] Morrison looks like me,” Baldelli said. “I was skinny like that. I was always worried about trying to gain weight and get bigger. I’m still thin, but in time you get stronger and your body kind of fills out and comes together. When I look at (Morrison’s) frame, I see a little of what I was dealing with at that time, too.”

On the Hot Rods offensive struggles so far this season:

“The Tampa Bay organization has always gone after good athletes,” he said. “A lot of that time that translates to good major league players someday. These guys are young. I remember playing at this level when I was 19. There is a lot of learning to do. The players these guys are now are not the players they will be in three, four, five years. They are going to take some pretty nice steps forward and they will learn a lot this year.”

Again, make sure to read the full article by Micheal.
-- By Doug at 2:54 PM
Email ThisBlogThis!Share to TwitterShare to FacebookShare to Pinterest