It's been difficult finding news out of the Florida Instructional League, but here are a couple of tidbits on Matt Moore and Reid Brignac: 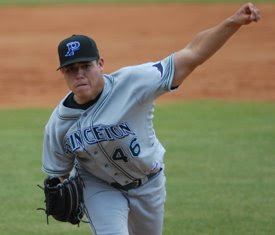 "When he came here, he had wonderful tools," [Mitch, Tampa Bay's director of Minor League operations] Lukevics said. "And I've seen him over a dozen times since and, without a doubt, he has great composure on the mound and great stuff. It's not the norm in the age group that Matt Moore is in to have that kind of composure. It's more abnormal, but it's great to see. "In Matt's case, he is very mature and was mature from the get-go. [Maturity and composure] goes hand in hand. He's a very confident young man, without question. Even though he's spent two years at Princeton, he's facing hitters two, three, four and in some cases five years older than him. It's a great barometer to see what he did this season."

In other Rays' news, shortstop Reid Brignac continues his comeback from a broken wrist. After working out with Durham during the International League Finals last month, he finally WAS ready to get back into game action and made his presence felt, collecting three RBIs in his first FIL game. "He was never near ready to being activated during the playoffs," Lukevics said. "We just wanted to get him there, where they had a full staff and he could work out with them. And he's looked terrific [here]."

They also discuss Moore's fastball as low to mid-90's, topping out at 95. Nothing on where he'll start next year, just that it could be Hudson Valley or full-season A, which we already knew. I'd love to see him go to Bowling Green, but the Rays history with young pitchers is one level a year until A+, so I'm guessing Hudson Valley.
-- By Doug at 11:46 AM
Email ThisBlogThis!Share to TwitterShare to FacebookShare to Pinterest