One of the Rays is blogging about his experiences in the AFL:

"Greetings baseball fans. Thanks for joining me this week as we
open the 2008 Arizona Fall League season. For those of you who don't
know me, I'd like to take this opportunity to introduce myself.
My name is Mike Wlodarczyk, and I am coming to you from Peoria,
Arizona as I represent the Tampa Bay Rays organization while playing
for the Peoria Javelinas.
...
Now that we're caught up, I'd like to give you an inside look at
what's been going on in the weeks leading up to now.
Following the end of the regular season in early September, I had
about three weeks to relax at home before reporting to St. Petersburg
on the 25th. There we worked out with our instructional league team
for a handful of days in preparation for the first fall league workout
on October 2nd after flying in on the 1st."

In the AFL today, four Rays are in the starting lineup for the Peoria Javelinas (3-0) as they face the Peoria Saguaros (3-0) in a battle between the only two unbeaten teams in the AFL. Lineup:

In the Venezuelan Winter League, Caracas native RHRP Jose Angel Mejias (Columbus in 2008) has been added to the roster of the Leones del Caracas, joining Ben Hendrickson and John Jaso.

If you're like me and plan to make a trip to see the Princeton Rays next year, their schedule should be available the 3rd week of December. 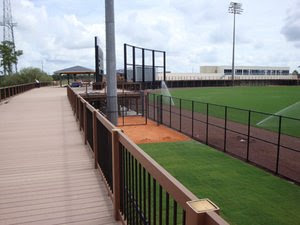 Our new A+ affiliate, Charlotte County (replacing Vero Beach), is putting more than $27 million worth of renovations into Charlotte Sports Park. When renovations are finished, there will be more than 5,100 fixed seats with ultra-comfortable, theater-style seats in the upper and lower levels. Other features include a Baseball Boardwalk (pic) which is a walkway around the entire stadium, a Tiki Hut bar behind the fence in left-center, new press boxes, 5 luxury suites, four main concession stands, a brand new clubhouse that spans more than 45,000 square feet, state-of-the-art weight rooms, training rooms, hydrotherapy pools, player lounges, and new administrative offices for front office staff. You can click here to take a virtual tour of the ballpark renovations.

And finally, today's game against the Phillies was the Rays' final Florida Instructional League game.
-- By Doug at 2:27 PM
Email ThisBlogThis!Share to TwitterShare to FacebookShare to Pinterest