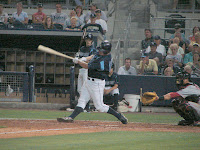 [Via email from Jonathan Gantt Marketing Manager of the Stone Crabs.]

PORT CHARLOTTE, Fla. -- The Charlotte Stone Crabs took a heavy counter-punch from the Bradenton Marauders in a 6-1 defeat at Charlotte Sports Park on Friday night.

After averaging 5.45 runs per game over the last 10 games, the Stone Crabs offense plated just one run on four hits in their lowest scoring output since April 25. The loss came after the Crabs (16-11) served the Marauders with a 8-1 defeat of their own last night.

The Stone Crabs pitching staff still managed to record another 10 punchouts for their 14th double-digit strikeout game of the season in just 27 contests. The team is currently on pace for 1,381 strikeouts for the year, which would shatter the FSL record of 1,132 set by the Tampa Bay Rays.

Charlotte starter Joe Cruz (1-2) took the loss after giving up five runs in four innings. The tough outing was a reversal of fortune for Cruz who actually picked up his first win just five days ago after pitching six shutout innings against Bradenton at McKechnie Field. He continues to suffer from poor run support though as the offense has only mustered 14 runs in his six starts this season.

Bradenton (16-12) got on the board early with runs in the first and second innings. The first run came on an RBI double from Tony Sanchez and the second on an RBI groundout from James Skelton.

Charlotte answered with a run in the bottom of the second inning when Stephen Vogt scored from third on a ground ball to first base from Michael Sheridan. Vogt had led off the inning with a double to left-center field to extend his hitting to nine games, tying Henry Wrigley for the longest streak for the Stone Crabs this season.

The Marauders wasted little time getting that run back and then some with two runs in the top of the third and another run in the top of the fourth. The fourth frame proved to be Cruz's last, and Neil Schenk relieved him to start the fifth inning.

The homestand concludes with a 7:05 p.m. matchup tomorrow night at Charlotte Sports Park. Southpaw Frank De Los Santos (4-0, 2.25) will toe the rubber for the Crabs against righty Nathan Adcock (3-2, 2.33) for the Marauders.

Tomorrow will be Breast Cancer Awareness Night presented by Advanced Imaging of Port Charlotte. The entire Stone Crabs team will wear pink uniforms during their game against the Marauders for the special "Pink in the Park" event, and the jerseys will be auctioned off during the game with all of the proceeds going to the Susan G. Komen for the Cure Foundation. Call 941-206-HITS or visit www.StoneCrabsBaseball.com for more information.

In addition to the game, Stone Crabs players will also make an appearance at the Port Charlotte Town Center mall on Saturday from 11:30 a.m. - 12:30 p.m. Several players and team mascot Stoney will be on hand to sign autographs and take pictures free of charge. In addition, the Stone Crabs will donate $1 to the Susan G. Komen Foundation from every ticket purchased at the mall event.
-- By Doug at 10:16 PM
Email ThisBlogThis!Share to TwitterShare to FacebookShare to Pinterest