Checking in on Bowling Green 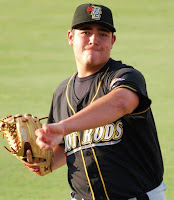 Nick Barnese and Matt Moore took the mound in Greensboro earlier this week and did not fail to impress. Greensboro has one of the better lineups in the South Atlantic League, and is currently second in the league with a .727 team ops and leads the league in homers by 17, likely thanks to the hitter friendly confines in Greensboro. In the first game of the series on Monday, Nick Barnese took the hill and tossed five quality innings against the Grasshoppers. Moore followed him on Tuesday and threw five equally good innings of his own.

Nick Barnese’s fastball sat in the 90-92 mph range all night and featured heavy sinking movement, especially when he kept it down in the zone. He did a fairly good job commanding this pitch. Even though he only got two groundouts in this outing, this pitch is a great groundball producer, as his 1.49 ground to fly out ratio on the year indicates. He paired this pitch with a quality changeup around 80 mph that had similar movement as the fastball. He got several swings and misses with this pitch but did leave it up in the zone a few times. Barnese’s curveball was good at times but still needs work on consistency. When thrown in the upper 70s it had good ¾ break, but when he powered it up into the low 80s it had a bit more depth than lateral movement and a sharp break. He still needs work refining this pitch and his command but it certainly has plus potential. Three of his five strikeouts came on curveballs, while his fastball and changeup each netted him a strikeout. Barnese still has plenty of projection left so his fastball could increase its velocity in the coming years.

Barnese’s night could have been better were it not for two Tim Beckham errors. After loading the bases in the 5th inning and bringing in a run by hitting a batter with no outs, Barnese struck out the next better then induced what should have been an inning ending double play. Beckham fielded the ball near second base, but hesitated a moment before touching the bag for the second out, then rushed and misfired the throw to first, allowing two runs to score. Beckham also mishandled a grounder in the first inning. Beckham did hold his own at the plate in these two games though, displaying the quick wrists and good bat speed that made him the #1 overall pick in 2008. He went 5-10 over the two games and hit two doubles, including one ripped down the line that yielded two runs for Bowling Green. He did not hit any of the balls with much loft, but I think that as he gains experience and becomes stronger, his power will develop.

Moore featured a similar arsenal in this outing as Barnese had the night before. Moore threw his fastball in the 90-91 mph range according to the stadium radar gun. He may have been throwing mostly two-seamers as this pitch had very good armside movement. He’s certainly been known to throw harder in the past. Regardless of the pitch’s velocity, it was still overpowering Greensboro’s hitters, as no one was really able to turn on the pitch or hit it with much authority (or at all). Moore’s curveball also showed promise, with sharp ¾ break at times. He did struggle commanding this pitch and let a few fly well out of the zone, up and into left handed batter’s box. His changeup was also surprisingly good and could become an above average pitch. Three of his six strikeouts were with his curveball, while two came via high fastballs and one from a changeup. He still needs work refining his command and feel for his off-speed pitches. He didn’t allow a hit until the fourth inning, and only allowed two during his five innings, but did issue three walks.
-- By Andrew Leslie at 10:26 PM
Email ThisBlogThis!Share to TwitterShare to FacebookShare to Pinterest