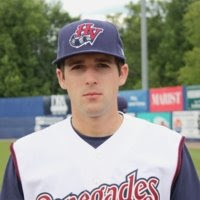 Jake Jefferies had a bit of a similar profile to Rays' 5th rounder Mike Sheridan: the two were among the toughest college hitters to strike out over the past few seasons. Jefferies struck out just 30 times in 499 at-bats over three seasons as the backstop for UC-Davis.

Jefferies hit .387 his junior year, and carried his good contact skills over to pro ball, hitting .315/.379/.433 in 66 games for the Renegades. He only actually caught in 20 games and was primarily serving as the DH as Mark Thomas got the majority of the starts behind the plate.

A left-handed hitter, Jefferies' best tool is clearly his contact, and he lacks a glaring weakness. He's more of a gap-to-gap hitter than a homerun threat, and while he could develop more power in the future, it could come at the expense of his contact. He'll occasionally chase a bad pitch, but has good control of the strike zone and should continue to draw an average number of walks. Defensively, Jefferies is a nice strong target behind the plate, but he's also an above-average athlete for a catcher and features clean footwork. The one drawback to his defense is arm. His throws can get loopy at times, but the arm should be at least adequate.

The key for Jefferies as he progresses through the system will be keeping up the batting average while providing decent defense. At this point, any real homerun power he develops would have to be considered a bonus. As a 3rd-round pick, it's tough to imagine the Rays limiting him to DH in 2009. Instead, he's likely ticketed for low-A Bowling Green, where he'll catch a talented pitching staff.
-- By Riven G at 1:36 AM
Email ThisBlogThis!Share to TwitterShare to FacebookShare to Pinterest