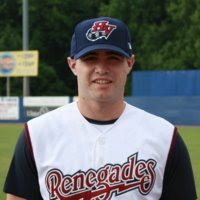 Michael Sheridan ranked has one of the hardest players to strike out during his career at William & Mary, striking out a remarkable 27 times over three years, including 5 times his entire junior season. Despite battling some injuries in his pro debut with Hudson Valley, he showed a lot of the same skills with the Renegades that he did when he tore up the Colonial Athletic Association.

Sheridan's knack for making contact time after time easily ranks as his best tool. After hitting .423 his junior year, he went 25-78(.321) with the 'Gades. The two biggest drawbacks about Sheridan are his on-base and power skills. Despite showing good control of the strike zone, he doesn't draw many walks(18 his junior year of college, 4 in his pro debut). This isn't necessarily a bad thing: As long as he can recognize pitches and is willing to wait for one he can drive, then he should still be able to find success as he moves through the organization.

The bigger problem, being as he is a 1st baseman, is his lack of power. He did hit 15 his last year of college, but doesn't project to hit for much power with wood bats, and went homerless in his debut with Hudson Valley. He has solid gap power, but the key to him breaking out and making the jump from average prospect is home-run power. He has a very nice swing, but it's clearly conducive to a contact-heavy approach. His swing may have to be re-tooled to unlock some power, but then the trick is to not lose too much of his contact skills.

Sheridan isn't horrible with the glove, but he doesn't have the tools to player anywhere else on the diamond. Still, average defense will suffice if he can break out with the bat. He's ticketed for low-A Bowling Green to start 2009, but could hit his way to Port Charlotte during the year.
-- By Riven G at 11:36 PM
Email ThisBlogThis!Share to TwitterShare to FacebookShare to Pinterest