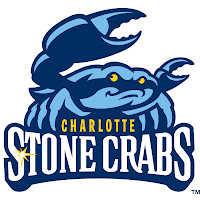 The Charlotte Stone Crabs (A+) unveiled their logo and jersey designs tonight with some help from members of the Charlotte County Boys and Girls Club at the Port Charlotte Town Center mall in Port Charlotte. The newest member of the Florida State League showed off their new logo to a crowd of more than 350 fans as members of the Boys and Girls Club helped model t-shirts and hats. “We continue to have big milestones every week, and this is certainly our biggest,” said Joe Hart, general manager of the Stone Crabs. “After seeing the success of the unveiling event and the tremendous response from the Charlotte County community, this just adds to the excitement and momentum heading into 2009.”

The team’s primary logo features the local stone crab with its signature large, crusher claw and the familiar sunburst that was part of the Tampa Bay Rays new logo at the start of the 2008 season. The Stone Crabs home and road jerseys and home team hats also resemble their major league counterparts’ in design and color scheme.

Since the Stone Crabs announcement as the third Minor League team owned by Ripken Baseball in late August, the team has sold more than 800 full season seats. “Unveiling our logo was another big step for our organization, and we know it will be a big help in promoting our family fun atmosphere at the Charlotte Sports Park next year,” said Cal Ripken, Jr., founder of Ripken Baseball.

The logos were created by Studio Simon, a design company based out of Kentucky that has worked with more than 60 minor league baseball teams across the country. In addition to designing logos for Minor League Baseball teams like the Trenton Thunder, Toledo Mud Hens and the Ripken-owned Augusta GreenJackets, Studio Simon has also worked with Major League Baseball and the National Football League. “Our goal was to create an identity that captured both the professional baseball and family entertainment components that are unique to the minor league baseball experience,” said Dan Simon, creative director for Studio Simon.

I like it a lot. The alternate logos and jerseys are nice too, maybe I'll post them later. Great job by the Ripken/Port Charlotte folks.
-- By Doug at 7:08 PM
Email ThisBlogThis!Share to TwitterShare to FacebookShare to Pinterest