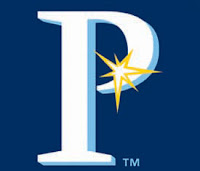 Our rookie-level affiliate in the Appalachian League has announced that effective December 1st they have officially dropped the 'Devil' from their name: "It's no longer a technicality today. Even those that still choose to refer to the Princeton professional baseball squad as "Devil Rays" can now be considered to be officially incorrect. The anticipated change of the Princeton team name to "Rays" became a reality on December 1, 2008."

They also have new team colors: "The new team colors as described in the broadest of terms are navy blue, a lighter blue trim known to locals as either sky blue or Carolina blue, and a bright yellow."

A new uniform design: "Both the Princeton white home uniforms and the gray road jerseys will have just the one word "Rays" prominently across the chest. The word Rays will be in navy blue with the lighter blue trimming the letters in a shadow fashion. Affixed on the enclosed part of the letter "R" will be a yellow burst of light pattern."

New ballcaps: "The caps will be navy blue with a large white "P" shadowed with the lighter blue trimming. The yellow burst of light pattern will once again appear inside the enclosed portion of the "P"."

And a new website: "Also in accordance with the name change, the team's website address has been changed from www.princetondevilrays.com to www.princetonrays.net."
-- By Doug at 12:42 PM
Email ThisBlogThis!Share to TwitterShare to FacebookShare to Pinterest