Based on last year's series of Minor League Breakdowns I'm going to do a similar series this year again. The intention is to monitor the development of our minor league players throughout the year. Each post will firstly take a look at the stats before pointing out some risers as well as fallers. A deeper look at one specific prospect will round out each post.

1) Based on your requests, I'm this year looking at all minor league players (who have had at least one PA/IP).

2) In one post (approximately every two weeks) I alternative focus on either MiL-pitchers or -hitters.

3) I'm looking at the following stats from FanGraphs. There will be a summary and an explanation of the stats used at the end of every post. In order to know what they mean, please follow the links for every stat. Thank our very own Steve Slowinsky for those explanations. 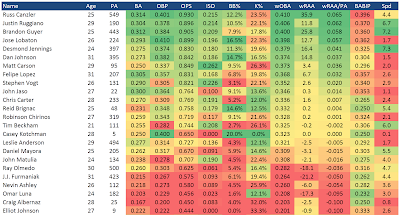 (click on the image for a better view)
-- By BurGi at 7:00 AM
Email ThisBlogThis!Share to TwitterShare to FacebookShare to Pinterest