The new season has started and lots of the hitting prospects have 40 or more PA's under their belt. This means, that it's time to look at their stats for the first time. Don't forget, though, that the sample sizes are extremely small. Therefore, I'm also only talking about prospects who at least have had 40 PA's so far.

Overall, the hitting prospects are doing much, much better than the pitching prospects. With the exeption of Bowling Green, every pitching staff is ranked in the bottom 4th of all teams in their leagues. The Rays prospects are doing better on the other side of the ball. The Bulls are below average, though, while having been one of the best offenses over the last couple of years. The Biscuits are about league average while the Stone Crabs' offense is below average. The Hot Rods, on the other side, boost the 2nd best offense in the young season. They have 9 players with a wOBA higher than .350 (min. 25 PA's) and with Tyler Goeddel the 4th best offensive player (according to wOBA; min. 30 PA's) in the Midwest League.


Prospects stats overview
Some prospects look like superstars right now, while some look like total busts. That is what small sample sizes do to player analysis. Nevertheless, some trends can and should be recognized ... and they all open up some questions: Should Brandon Guyer, Henry Wrigley and Cole Figueroa have started into the season one level higher? Can most of the younger prospects in Bowling Green even improve upon their promising starts when the season goes on (Tyler Goeddel, Ryan Brett, Juniel Querecuto, Drew Vettleson)? Are Mike Sheridan (shows some power and contact) and Henry Wrigley (where does this plate discipline come from?) putting it together? Can Hak-Ju Lee, Mikie Mahtook and Tim Beckham improve upon their rough starts? 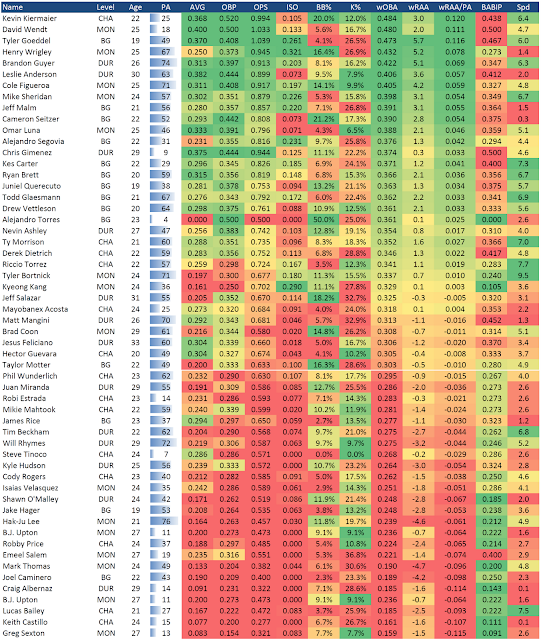 (click on the image for a better view)
Prospects on the rise
Prospects to be falling
Glossary
All of the stats provided above are excluding the stats from the previous day. I preferrably use FanGraphs as source for the stats. Click on each stat for its explanation:
-- By BurGi at 6:26 AM
Email ThisBlogThis!Share to TwitterShare to FacebookShare to Pinterest