After looking at the hitting prospects in the last (and first) minor league breakdown of the season, I'm today researching the pitching prospects.
First, I'm looking at the condition of each minor league affiliate. Well, that's not a pretty thing to look at. The Bulls have lost all of their 7 games last week and, overall, 13 in a row. The Biscuits have only won 2 of the last 8 while the Stone Crabs have at least gone 4-4 despite losing their last three games. Even the Hot Rods out of Bowling Green have lost 5 of their last 8. This means that the 4 minor league affiliates combined for a 29% winning percentage with 9 wins and 22 losses since the last minor league breakdown. Here are the numbers per affiliate:

OPS-CH and ERA-CH stands for the OPS and ERA change in the last week.

While the overall offensive outings - with above average offenses in Montgomery and especially Bowling Green - are solid, the pitching looks horrid. The Bulls and the Biscuits are last in their respective leagues according to ERA and the Stone Crabs are not much better (3rd to last).


Prospects stats overview
I've started with the hitting prospects last week in order to let most of the minor league starting pitchers throw in 4+ games. And while most starters now have had 4 or 5 starts, it's still pretty small sample sizes we analyze here. Please keep that in mind. Therefore, I'm only looking at pitchers with at least 15 IP. Here are some trends: 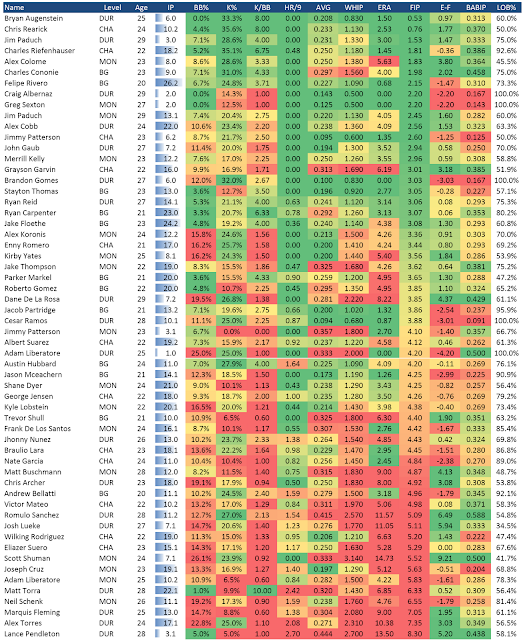 
Glossary
All of the stats provided above are excluding the stats from the previous day. I preferrably use FanGraphs as source for the stats. Click on each stat for its explanation:
-- By BurGi at 2:46 AM
Email ThisBlogThis!Share to TwitterShare to FacebookShare to Pinterest