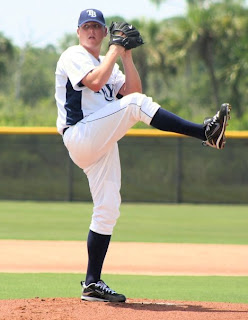 Jake McGee made his fourth rehab start of the year this year for the Gulf Coast League Rays, and his second straight against the Boston Red Sox organization. McGee threw one scoreless inning, not allowing any baserunners and striking out two. Not exactly sure why he only threw one inning, hopefully they were using this start as a bullpen session or something along those lines.

McGee went 2.2 innings in his last start, and has thrown 5.2 total innings so far for the GCL this summer. He has compiled a 3.18 ERA and allowed two earned runs in four starts.
-- By Nick Hanson at 8:49 PM
Email ThisBlogThis!Share to TwitterShare to FacebookShare to Pinterest