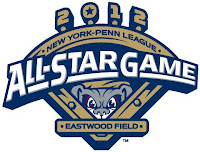 The Hudson Valley Renegades are well represented in the 2012 New York-Penn League All-Star Game as five six Renegades have been selected for the event. Jeff Ames, Thomas Coyle, Taylor Guerrieri, Jose Molina Leonardo Reginatto and Joey Rickard will make the trip to Ohio to represent the American League.

Ames is a perfect 3-0 on the season with a 1.85 ERA and 43 strikeouts in 9 starts this season. Ames is in his second season in the Rays organization as he was drafted by the Rays in the first round of the 2011 draft out of Lower Columbia College.

Joining Ames on the mound will be another dominate Renegades pitcher in Guerrieri. Guerrieri has yet to record his first professional win but has a 1.24 ERA and 25 strikeouts in 7 starts this season. He is in his first season in the Rays organization after being selected in the first round of the 2011 draft out if Spring Valley (SC) High School.

Molina was added to the all-star roster after the league released the all-star teams.  Molina is 2-1 with a 1.25 ERA for the Renegades this season.  He is in his fifth season with the organization after being signed as an international free agent.

Reginatto makes the all-star team in his second season with the Renegades. He is hitting .289 with 6 doubles and 20 RBI’s in 44 games this season. Reginatto was signed as an international free agent in 2009.

Rounding out the Renegades All-Star is Rickard. While Rickard doesn’t have enough at-bats to qualify for the official team lead, he currently has the highest average on the club. He is hitting .323 with 7 doubles, a home run and 5 RBI’s in 24 games. Rickard was drafted by the Rays in the ninth round of this year’s draft out of the University of Arizona.


-- By Donten Photography at 8:57 PM
Email ThisBlogThis!Share to TwitterShare to FacebookShare to Pinterest