UPDATE: Now with BA-Top 30 (via Marc Topkin and DRaysBay) instead of Top 10.

In the following table you can see all the players listed who either cracked at least one of those 9 lists or who are on our Rays Top 30 Prospect List. Overall, that makes 34 players listed (including Russ Canzler who is no longer with the organization). Players who were not listed on a single prospect list got the value of the last ranked player times 1.5. (e.g.: on BA's Top 10 Prospect List every unranked player got a "ranking" of 10*1.5 = 15). Each of the Bullpen Banter lists was weighed with 0.5. 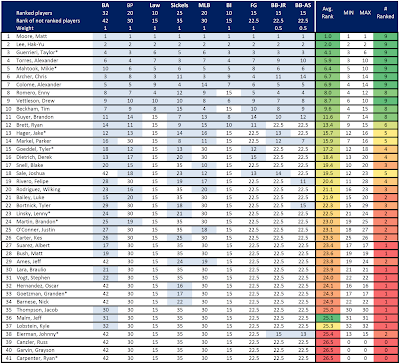 -- By BurGi at 4:00 AM
Email ThisBlogThis!Share to TwitterShare to FacebookShare to Pinterest